“A man was lynched by police yesterday.”

Those jolting words are etched in bold, white letters on a black flag hanging in a storefront window. It stopped every man, woman, and child who happened to be walking past it in Manhattan’s West Village.

Once you step inside the building where it hangs, you’re easily overcome with emotion. In this space, stories of the devastating effects of  “Broken Windows” policing on Black and Latino communities are on full display.

The artwork, which includes paintings, photos and other thought provoking elements, are part of the Museum of Broken Windows, a one-week only, pop-up exhibition hosted by the New York Civil Liberties Union (NYCLU) featuring 30 artists and 60 words from around the country. Their creations are meant to show the impact of the controversial policing strategy, which targets offenders of minor, non-violent crimes such as turnstile jumping or drinking alcohol in public in an effort to prevent them from executing larger ones.

“Broken Windows policing is a product that New York City has exported across the country, so it’s something that we are grappling with nationwide,” said Johanna Miller, advocacy director at the NYCLU. “We think it has failed us and caused enormous damage in communities of color.”

The realities of that damage are made tangible by installations like artist Nafis White’s photo series “Phantom Negro Weapons” that presents a visual record of items carried by unarmed African-Americans who were victims of police violence. The collection includes photos of items such as candy, loose change, and a spoon to challenge the justifications given by police officers who use deadly force as their defense.

Michael D’Antuono’s painting, “The Talk” captures the disheartening but necessary conversation that all Black parents must have with their children, especially their sons, about how to handle encounters with the law enforcement.

Proponents of the practice say it has lead to a steep reduction in crime, but critics argue that there is actually no date or direct correlation to support that notion. The practice has also been deemed as discriminatory against people of color. 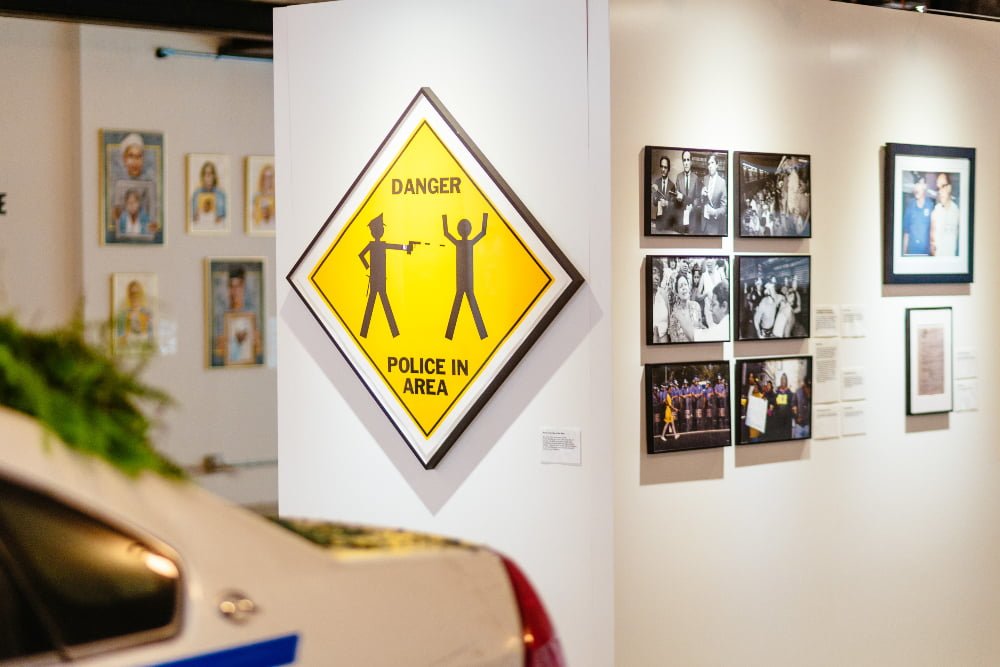 An example of the artwork featured at the MUSEUM OF BROKEN WINDOWS. (Photo credit: Sy Abudu for NYCLU)

“Oftentimes issues such as broken windows policing can get really get caught up in big political ideas and what we lose is the human impact of it,” said Daveen Trentman, co-founder of the Soze Agency and executive producer of the museum exhibition.

“What this museum does is it tells the stories of broken windows from the people who have experienced it and that’s what so important about it,” said Trentman, who collaborated with the NYCLU to organize the exhibition.

Interestingly enough, several of the artists featured were formerly incarcerated or have had devastating experiences with broken windows policing themselves so the basis of their art comes from personal experiences. Walking through the exhibit evokes feelings of empathy, and for many, a desire to act in order to make a change.

Russell Craig was incarcerated for seven years on non-violent drug charges. The Philadelphia-based artist saved his processing papers, sentencing documents and bail receipts from that time and used it as his canvas to draw his self-portrait. His intention is to send a message that the system, which tried to define him, could not.

Russell Craig’s used his old court documents as the backdrop to paint his self-portrait. He used four canvases and placed himself in the center, symbolizing what he says is a black man being targeted by the system. (Photo by Melissa Noel.)

Other installations include Ann Lewis’ “And Counting,” which is a 20-foot installation featuring 1,093 toe tags each filled out with the names, ages, race and cause of death of every person in the United States killed by police in 2016. 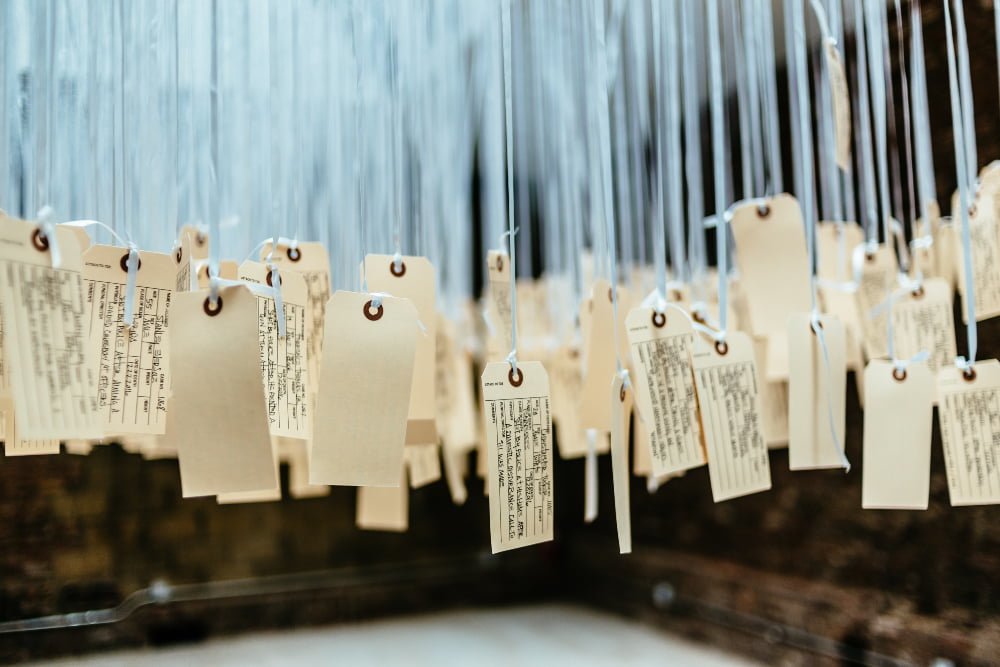 Ann Lewis’ “And Counting,” featured at the MUSEUM OF BROKEN WINDOWS.The exhibit makes use of toe tags to depict the names and stories of the 1,093 people killed by police in 2016.(Photo credit: Sy Abudu for NYCLU)

“What I am trying to do with my work is really to engage people in an emotional space around issues that they may or may not be entirely familiar with,” Lewis said. “How can we really shift things so that people’s lives aren’t being ruined because they are constantly being harassed by police or worse killed by the officers?

The Museum of Broken Windows has taken tragic stories of police violence, provided historical context and employed art to humanize the statistics often associated with police violence into stories of hope and inspiration. 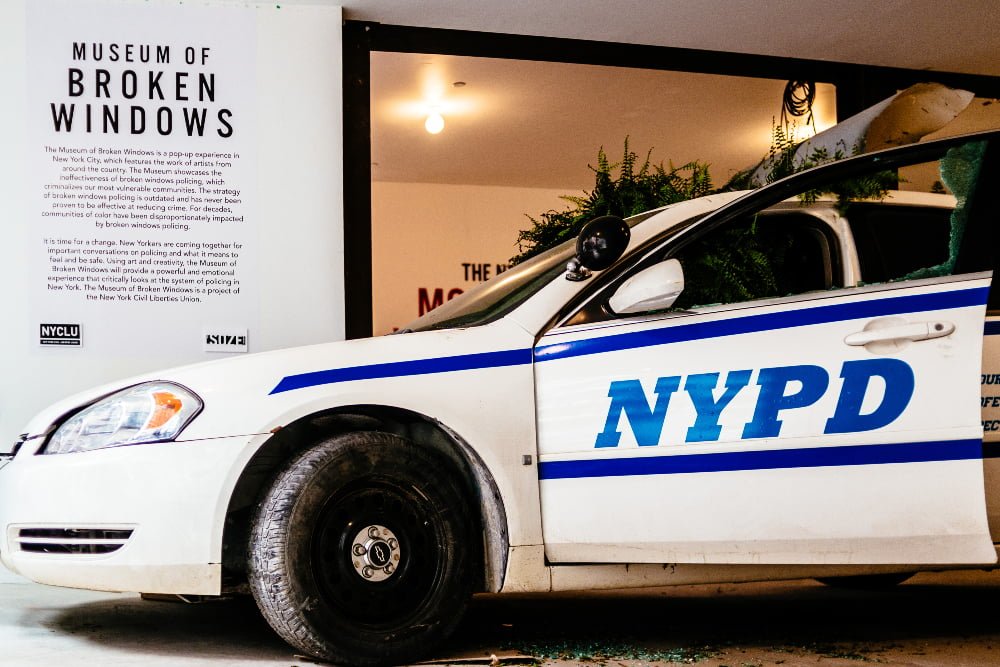 An example of art at the MUSEUM OF BROKEN WINDOWS. (Photo credit: Sy Abudu for NYCLU)

“We’re really hoping that every person that comes into this museum feels the urgency in this and also can work together as one New York to end this practice once and for all, to tell the mayor that broken windows belongs in a museum, not in the streets,” said Johanna Miller.

“We’ll be asking people to take an action and send a postcard to the mayor saying exactly that.”

The pop-up museum is open until September 30. The Museum, located in New York City’s Greenwich Village (9 West 8th Street) is also hosting a series of discussions all this week and a screening of the documentary Crime & Punishment on Saturday at 7pm. For more information, visit nyclu.org/en/mobw.