Michelle Obama rallies youth voters to ‘take their power back’

"When a huge chunk of the population sits out of the process, why are we surprised when our politics don't reflect our values?" she told the crowd at the University of Miami. 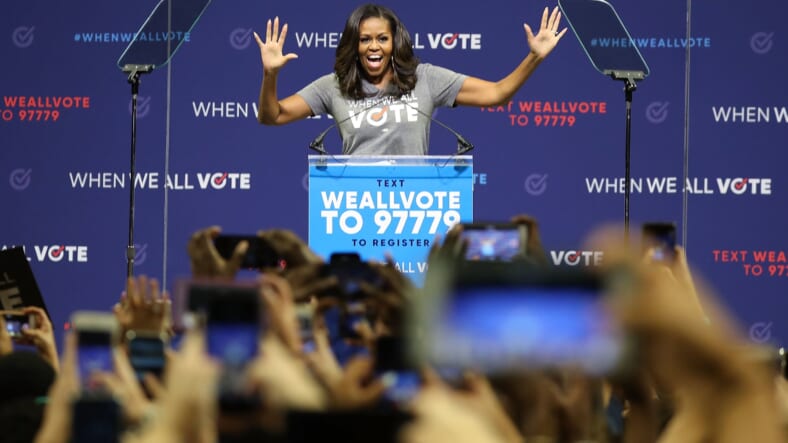 CORAL GABLES, FL – SEPTEMBER 28: Former first lady Michelle Obama speaks during a When We All Vote’s National Week of Action rally at the Watsco Center at the University of Miami on September 28, 2018 in Coral Gables, Florida. Obama is the founder and a co-chairwoman of the organization that aims to help people register and to vote. (Photo by Joe Raedle/Getty Images)

Former first lady Michelle Obama told a crowd of young voters to “take their power back” if they want to change the current political climate, and “actually do something about it.”

During a voter registration rally Friday at the University of Miami in Coral Gables, Fla., that also included former Destiny’s Child member Kelly Rowland, gospel singer Erica Campbell and “Key & Peele” star Keegan-Michael Key, Obama urged the crowd to show up during this year’s midterm election which traditionally has lower voter turnouts, according to The Associated Press.

About 40 percent of the population typically votes during midterm elections, according to The Associated Press. The 2014 midterms saw the lowest voter turnout since World War II, with less than 37 percent, she said.

“When a huge chunk of the population sits out of the process, why are we surprised when our politics don’t reflect our values?” Obama told the nearly 5,000 people in attendance.

While she didn’t mention any candidates or political parties by name, Obama said she wasn’t there “to tell anyone who to vote for.”

Instead, she wants to disrupt “a dangerous cycle when it comes to voting” of frustrated people angry about politics but does nothing.

She pointed to a 2016 city commission race in Cocoa Beach was decided by eight votes. She said a South Daytona mayoral race came down to just five votes.

The former First Lady recently launched “When We All Vote,” a national, nonpartisan not-for-profit organization. Friday’s event in Miami concluded a week’s worth of grassroots activism with some 2,000 events held in 49 states across the country.

READ MORE: Tomi Lahren tries to come for Michelle Obama but Black Twitter’s not having it