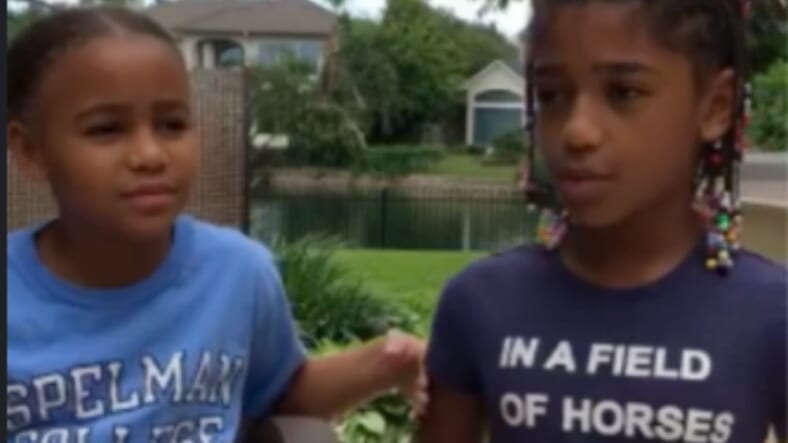 Two young Black girls doing their due diligence to help make America great again by campaigning for Texas Democratic Senate candidate Beto O’Rourke, along with their grandmother were confronted by an angry white racist who told them to “go back where you came from.”

The girls’ mother, Allison Odom said in a Facebook post on Sunday that her daughters were shocked by a man’s nasty rhetoric as he launched into a tirade calling the grandmother “a stupid b****,” Yahoo reports.

But the Texas mom said racists won’t deter her family and they will stay the course to help O’Rourke secure his Senate seat.

“Block walking in support of your preferred candidate or party is about as American as Apple pie….right?” wrote Odom on Facebook Sunday.

“Yesterday, while doing this “American as apple pie” activity within walking distance of my mother’s house, a man approached my mother and daughters and (among other choice words) demanded that they ‘go back where they came from’ because this is HIS neighborhood.”

“In 2018, some people are emboldened enough in their hate to accost a 70-year-old grandmother and her 8- and 10-year-old granddaughters. Please let this be a wake-up call of how real and unhinged the hate has become. We must call it out, and we must demand better.”

On Saturday, Rose Odom, was campaigning with her granddaughters when she pulled over her in search for a particular address. “A guy walked up to her and said, ‘What are you doing here?’” explained one of the children in a video.

The grandmother shot back, “What are you doing here?”

Don’t start none, won’t be none.

—After white gunman shoots six cops, killing one, many want to know how he was taken in alive—

The nosey man replied: “I’m just walking my dog, and I live here.”

Rose told the man that she too was a resident to which the racist replied:

“That still doesn’t explain to me why you’re here.”

Rose told the man: “It’s none of your business.” The man then called her a “moron” and the grandmother hit back, calling him an “Idiot.”

“And he told granny to get the f*** back where she came from,” one of the girls said, spelling out the curse word.

“And then granny said, ‘Well, you need to go back where you came from. I hope one day, if you meet an idiot too, that the idiot will have more respect for your grandchildren than you’ve shown me and mine,” the other little girl recalled.

Rose also challenged the man to call the cops, like most white folks tend to do when a Black person is minding their business.

The man ended his by walking away but not before walked away, calling the grandmother a “moron” and a “stupid b****.”

“He, I guess, suspected because we were Black we were about to rob his neighborhood,” said one of the girls. “He probably wouldn’t have done that to a white person because there were white people parked all around us in their cars.”

The girls are unbothered and said they will keep stomping the neighborhood in support of O’Rourke.