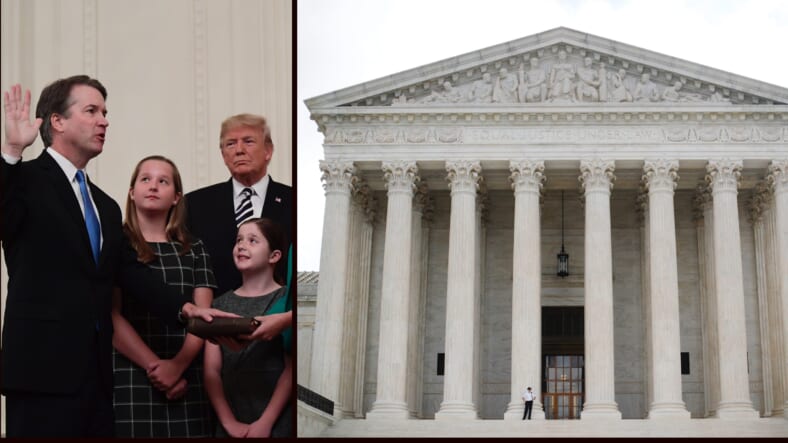 Brett Kavanaugh, who was recently christened as our latest Supreme Court Justice, has hired four law clerks to work with him, and they all happen to be women. But, one of these things in not like the other. Kim Jackson, a Black woman, will serve as one of those clerks, the Chicago Defender reports.

Kavanaugh hired four law clerks altogether, and “two of the three African Americans clerking at the Supreme Court this term have previously worked for Kavanaugh,” the Washington Post reported.

Kavanaugh, who came under fire after being accused of alleged sexual assault against Christine Blasey Ford and several other women, promised to diversify the ranks by hiring more women as clerks if he became a justice. His appointment marks the first step in keeping his promise.

“If confirmed, I’ll be the first justice in the history of the Supreme Court to have a group of all-women law clerks,” he said. “That is who I am.”

“The research showed that those prestigious one-year clerkships, a golden ticket to a top-tier legal career, were going overwhelmingly to white males,” USA Today reported in January. “Fewer than 2% were African-Americans, 1% were Hispanic, and only a quarter were women.”

According to the news outlet, Brett Kavanaugh’s appointment of a Black woman was likely done to counter reports that he has “racist tendencies” based on his rulings that include: a dissenting ruling in favor of stop-and-frisk policing; writing about racial profiling that “the desire to remedy societal discrimination is not a compelling interest;” and he opposed affirmative action.

Then there’s Zina Bash, Kavanaugh’s former law clerk, who was accused of throwing up a white supremacist hand sign during his confirmation hearing.

Brett Kavanaugh has been scheduled to settle in to hear his first cases this week; one of which is centered on violent crimes and the other on immigration detention policies.