Powerful vocals and gospel music were on full display during the touching tribute. 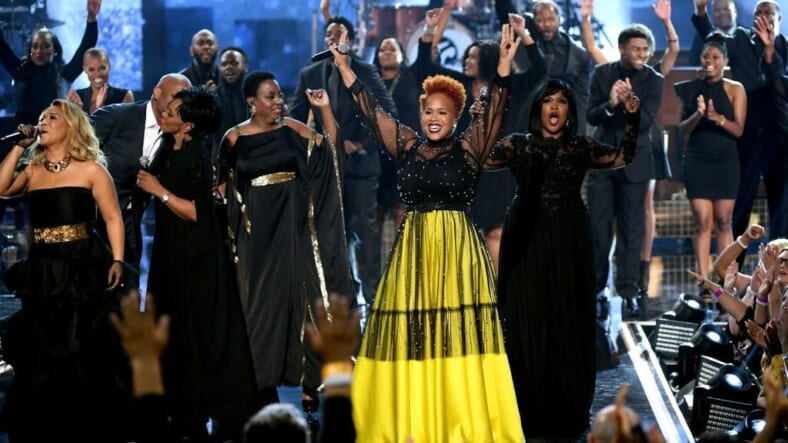 The 2018 American Music Awards were a bit underwhelming, but the Aretha Franklin tribute did not disappoint. Performers sang songs from Aretha’s 1972 Amazing Grace album, which is still the best-selling gospel album of all time.

The touching tribute to the late legend featured some of the biggest voices in the game and was led by Gladys Knight, who started things off by singing “Amazing Grace” and bringing the crowd to their feet.

Donnie McClurkin followed with a performance of “Climb Higher Mountains” before Cece Winans hit the stage with her rendition of “Mary Don’t You Weep.”

Ledisi served up “How I Got Over” with ease and we caught up with her before the show to find out how she felt about being part of the beloved star’s sendoff.

“This is my chance to say, ‘I love you’,” she told TheGrio exclusively on the AMAs red carpet. “I was so honored when Rickey Minor called me and asked me to be a part of the tribute and we’re going to do it right.”

Mary Mary closed out the tribute and the show and proved that very few can hold a candle to their powerful pipes. Erica Campbell and her sister, Tina Campbell may not perform together as much as they used to, but when these sisters sing, it’s a spiritual experience.

Their version of “Old Landmark” was the perfect conclusion to the tribute Aretha Franklin deserved and finally received.

The touching tribute to the Queen of Soul was produced by Emmy-winning music director, Rickey Minor and was undoubtedly the highlight of the show.