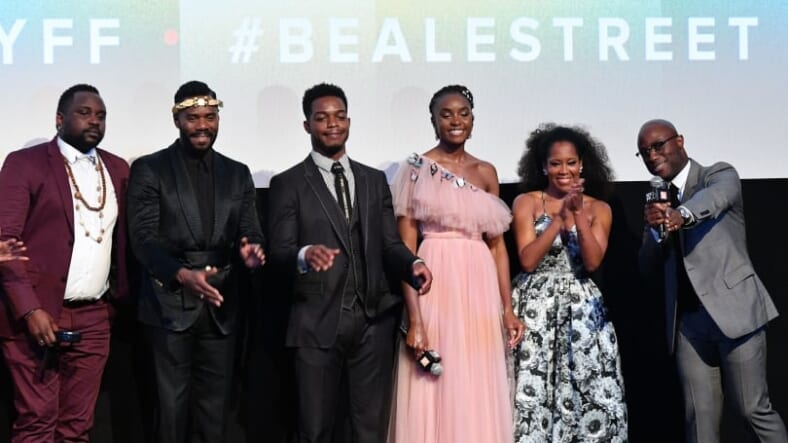 The legendary Apollo Theatre was all about the iconic work of James Baldwin Tuesday night. The 56th New York Film Festival premiered If Beale Street Could Talk based on Baldwin’s novel released in 1974. The novel was brought to the big screen by Academy Award-winning writer/director, Barry Jenkins.

The film tells the story of Tish (Kiki Layne) a newly engaged Harlem woman who races against the clock to prove her lover Alonzo’s (Stephan James) innocence for a crime he did not commit. This is all while being pregnant with their first child. The cast also stars Emmy-award winning actress and director, Regina King, Teyonah Parris, Dave Franco, Pedro Pascal, and  Brian Tyree Henry.

READ MORE: Kofi Siriboe on facing his own mental health and empowering others to do the same with ‘JUMP’

TheGrio hit the red carpet and caught up with Barry Jenkins and some of the cast. Jenkins shared his thoughts on the film coming into fruition during the turbulent times of 2018:

The power and wisdom in Baldwin’s work and Jenkins talents is what made this project different for Regina King.

“I mean James Baldwin and Barry Jenkins, you can’t ask for anything more, says King. “I haven’t done a film in almost 12 years, so for this to be the one with this cast, it’s surreal.”

READ MORE: A grateful Beyonce thanks all involved in the On the Run II tour

“I watched the film a couple of weeks ago in Toronto and i don’t really like to watch myself,” she continues. “and was just blown away. Myself, Brian Tyree Henry and my son, we were all sitting together and we had not seen the film and we were all crying in different places because it was moving us in different ways and that is what art is supposed to be. So to be a part of that, I’m feeling like I’m exercising my art.

The film is a celebration of love told through the story of a young couple and their families as they struggle to capture justice and freedom.

Ebony Obsidian who plays Adrienne Hunt says there is no way to not be present when watching the film. Everyone who watches the film will feel it from beginning to end and realize that we have a long way to go.

If Beale Street Could Talk is exclusively in NYC on November 30 and expanding on December 7th.

Check out theGrio highlights below: