The Power Of The Fist: 50 year anniversary of Tommie Smith’s Olympic protest

Exactly 50 years ago today, two track-and-field stars, who had just been awarded medals at the 1968 Olympic Summer Games in Mexico City, bowed their heads and raised their Black clenched fists in the air while the whole world watched in amazement.

Since that day, those two men, Tommie Smith and John Carlos, have become beloved icons with statues erected in their honor and their names solidified in the history books as legends.

While the current political climate in this country has been testy since Donald Trump took office, it still pales in comparison to 1968, which was literally one of the most turbulent years in American history.

At the time the nation was divided over the Vietnam War, the assassinations of Martin Luther King Jr., and Bobby Kennedy, the riots outside the Democratic convention in Chicago and the ever-growing civil unrest of fed up African-Americans whose families had been blatantly oppressed and discriminated against for centuries with little aid or interference from their government.

Back then, racism wasn’t just a matter of opinion, it was the law of the land and because the internet was still a dream of the future, television was king. The media had way too much of a monopoly on setting societal norms, which meant whoever (and whatever) you viewed while sitting around the small screen with your family had a huge impact on what was considered acceptable in your daily life.

When that global audience tuned in and saw Smith and Carlos not only win the gold and bronze medals for our country, but then have the audacity to raise their Black gloved fists in solidarity while the Star-Spangled Banner played in the background, people across the plains, both Black and white, knew exactly what message they were sending.

Their actions were a direct and heavy-handed smack in the face of white supremacy and Jim Crow-era policies that their countrymen were still being subjected to back home. Tommie Smith would later confirm that he made his historic gesture to protest human rights abuses around the world while also bringing international attention to the struggle for civil rights in the United States.

✊?As we were 50 years ago, our nation is in crisis. Today, I am raising my fist alongside Olympic champion @TommieSmith68, just as he did on this day at the 1968 Summer Olympics in Mexico City! His first salute was on the podium. His second, as he returned to the tunnel. Today and together, we join this living cultural icon on his 50th anniversary for his #THIRDSALUTE. I challenge my friends @KingJames @LenaWaithe @mspackyetti @janellemonae @michaelbjordan @jayelectronica @jamilahlemieux @crownpeace @snoopdogg @kaepernick7 @issarae @comedianlilrel @iamderay @lilduval @cp3 @bmarshh @shaunking @opalayo @vanlathan @mosesbread72 @obj @barackobama @timothyanne @kyrieirving @carmeloanthony @zendaya & @NPH and all of you to join us while using #THIRDSALUTE Challenge! Challenge yourself beyond symbols. Challenge others. Then go VOTE in November!

The raised fist has a long history where it has been used to express unity, strength, defiance, and/or resistance. It was featured as a logo by the Industrial Workers of the World (IWW) in Chicago back 1917, popularized during the Spanish Civil War in the 1930’s, used again by revolutionaries in Mexico in the 1940’s, and then spread back through the United States in the 1960s after artist and activist Frank Cieciorka re-conceptualized it for the Black Power Movement.

Fifty-years ago today, those two brothers lifted their fists under the Mexico City sky very decidedly putting their Blackness, their activism and their shared humanity first —even ahead of their own livelihoods. 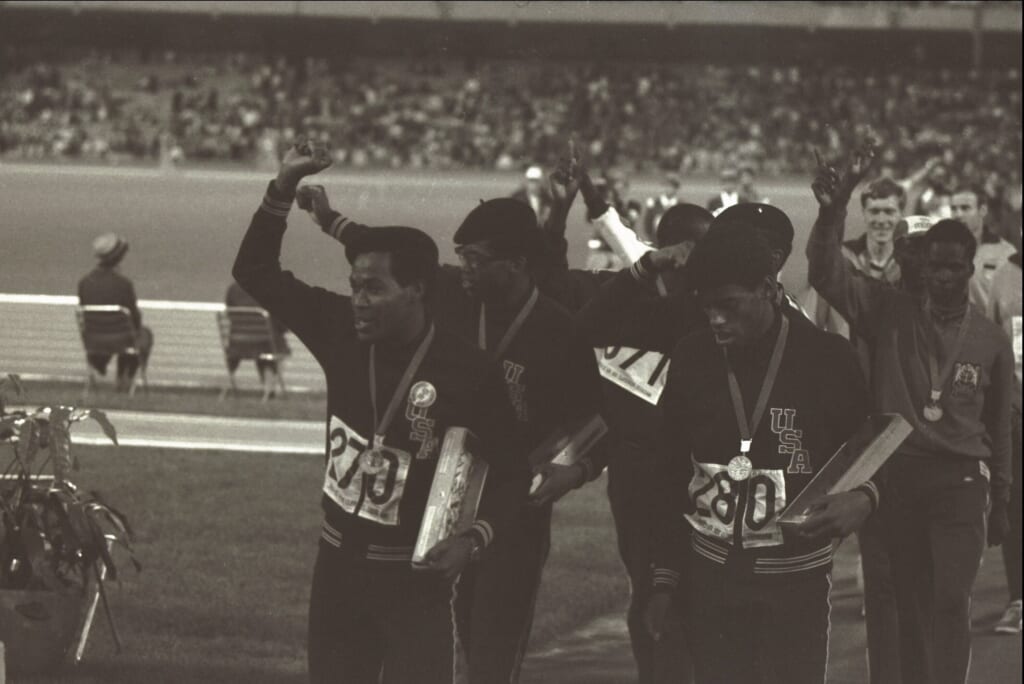 1968: The USA team which won the 4 by 400 metres relay in a world record breaking performance leave the arena, holding aloft clenched fists, at the 1968 Olympic Games in Mexico City, Mexico. (Getty)

And, they paid for it dearly.

While African-American viewers grappled with feelings of shock and pride about what they had just witnessed, the mainstream media mercilessly vilified the men for their actions. The U.S. Olympic Committee quickly sent them home in disgrace.

Christian Johnson Sr. (L) holds his daughter Chrisette Johnson, 6, on his shoulders and puts his fist in the air as a sign of ‘black power’ during a protest against police brutality and the death of Freddie Gray. (Photo by Chip Somodevilla/Getty Images)

Smith and Carlos forfeited the moment of glory they worked towards for their whole lives and instead gifted it back to their communities. The courage it took to do something so brazen at that specific point in American history has been acknowledged in countless countless ways over the last five decades, most recently with athletes like Colin Kaepernick underscoring the significance of their legacy with his own protest.

To commemorate the 50-year anniversary of that night, the High Museum in Atlanta is premiering an exhibition called, “With Drawn Arms: Glenn Kaino and Tommie Smith,” which is on view through January 6th. 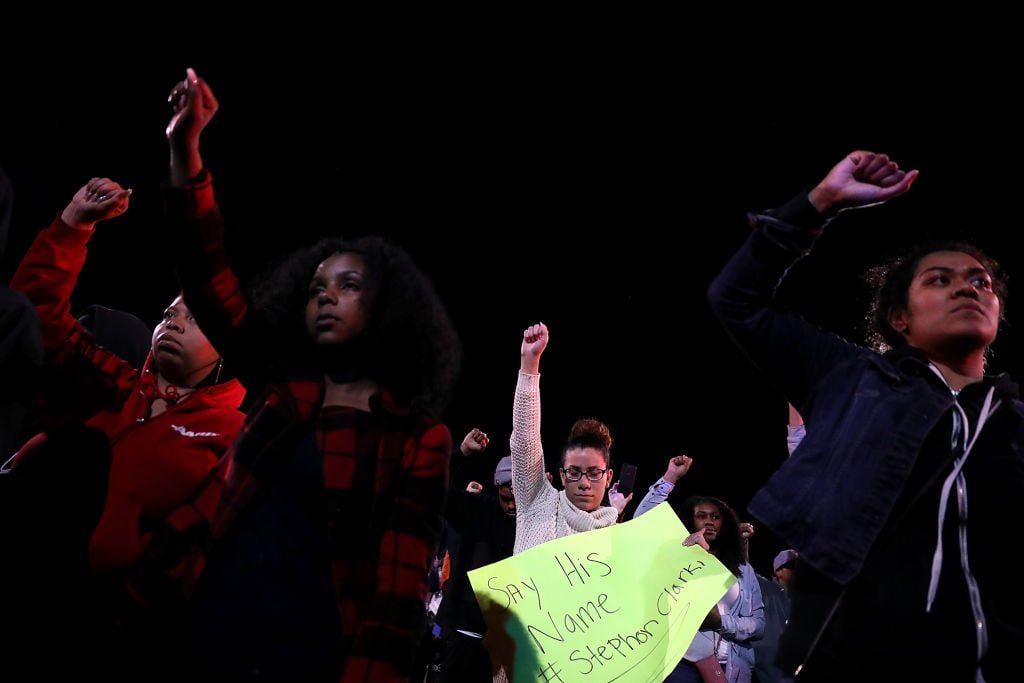 Black Lives Matter protesters hold their fists in the air during a demonstration on March 23, 2018 in Sacramento, California. (Photo by Justin Sullivan/Getty Images)

According to a press release shared by the curators, “This exhibition features sculptural installations and drawings by Kaino and Smith, excerpts from an original documentary about Smith’s life and his collaboration with Kaino… objects from the Tommie Smith Archives, as well as a series of drawings contributed by students from across the United States.”

“There may be no other event in the 20th century that so powerfully speaks to our present moment of confrontation with the endemic racism and inequality that persist in society today,” said Michael Rooks, the High’s Wieland Family curator of modern and contemporary art.

“The image of Tommie’s silent protest on the victory stand has become an iconic symbol of resistance and unity for generations. Our goal with this project is to ensure that Tommie’s message resonates for years to come,” said artist and collaborator Kaino.

You can learn more about the exhibit here.

50 years ago today, I stood on the podium and raised my arm in a silent protest. I did it a second time shortly after to show the world that it wasn’t a mistake. Now, I’m asking you to join me for my #ThirdSalute for all human rights. EVERYONE has permission and the responsibility to salute and stand together to fight for equality! Come join me @ijessewilliams, @yarashahidi, @nph, @common, @puma and let’s challenge even more! ?: @afshinashahidi