At a summit of young black conservatives, the president announced that a suspect in the rash of pipe bomb scares was in custody, but only after downplaying the incidents earlier 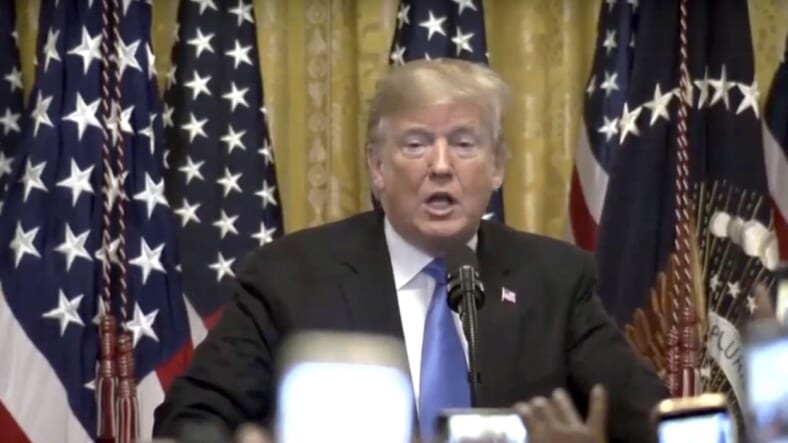 President Trump said that the suspect currently in custody for the spate of pipe bombs mailed to prominent Democrats and to CNN will be prosecuted “to the fullest extent of the law” during his first comments since the arrest.

Speaking at the Young Black Leadership Summit, an event geared toward Black Republicans, and featured conservative figures like Candace Owens, Stacy Dash, Larry Elder, and keynote speaker Ben Carson, Trump declared that “we must never allow political violence take root in America,” and insisted that Americans must “unify.” In his comments, he declined to say the names of any of the Democrats or CNN.

“We must never allow political violence to take root in America, cannot let it happen. And I’m committed to doing everything in my power as president to stop it, and to stop it now.” https://t.co/5MGorR3Wih pic.twitter.com/30Rr4nFoVH

VIDEO: Maxine Waters responds after bomb sent to her office ‘[Trump] in his own way really does promote a lot of violence’

The feds took Sayoc, a registered Republican who was arrested in 2002 for making bomb threats, into custody without incident and towed away his van, which was covered in Trump paraphernalia. Early Friday morning, bombs addressed to Booker and former national intelligence director James Clapper were found at a postal facility in Florida.

Sayoc is expected to be transferred to New York to face criminal charges in the incidents.

Trump’s remarks come hours after he tweeted that the media’s focus on bombs – which he put in quotation marks – was a distraction from Republican efforts in the upcoming midterm elections. He later took the opportunity to attack CNN, which was a target of Sayoc’s.

Republicans are doing so well in early voting, and at the polls, and now this “Bomb” stuff happens and the momentum greatly slows – news not talking politics. Very unfortunate, what is going on. Republicans, go out and vote!

The usage of “bomb” in quote marks was taken to be a nod to the fringe right wing activists who insist that the bombs were an elaborate hoax.