Children as young as 11 were taken from the school, along with staffers, heightening concerns among United Nations officials and bringing condemnation from human rights activists 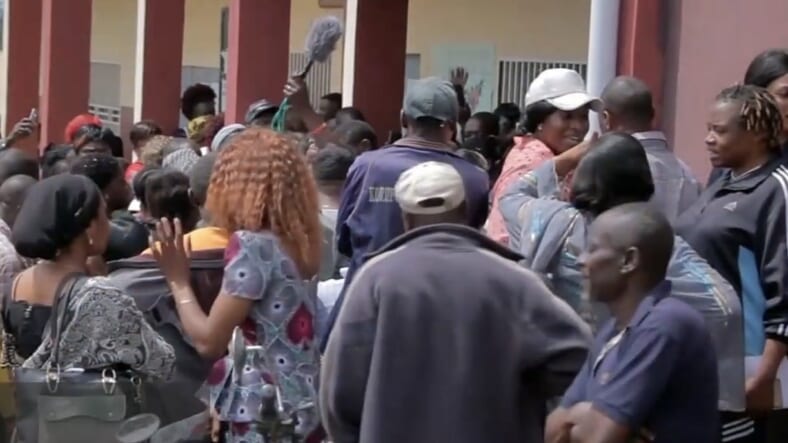 Parents at a Cameroonian school are worried about the whearabouts of 79 students kidnapped by rebels. Photo: ABC News

On Monday, at least 79 students and staff members were discovered missing from a school in Cameroon, and now human rights officials are condemning the kidnapping and demanding answers, ABC News reports.

“It is rather unfortunate that this is happening, that 79 of our children and three of their staff can be picked up by terrorists,” North-West Region Gov. Deben Tchoffo said. “We have asked our military to do everything and bring back the kids alive.”

The missing children range in age from 11 to 17, according to the Associated Press.

The troubled region is home to the Presbyterian Secondary School Nkwen in Bamenda, the capital of the country’s North-West Region, the AP reports.

A video was uncovered on Monday that showed the “Amba boys” were taken from the secondary school. According to reports, the Amba boys are from the English-speaking state of Ambazonia. The region is at odds in a struggle for independence from the Cameroonian government. Parents of the boys saw the video and confirmed their children were among the kids taken.

Government officials believe rogue separatist militias orchestrated the kidnapping, according to the BBC. A search and recovery effort is now underway.

U.N. spokesman Stephane Dujarric said Secretary-General Antonio Guterres condemned the kidnapping, and that “there can be no justification for these crimes against civilians, particularly minors.”

“Attacks on schools are a violation of children’s right and schools should be safe spaces and protected at all times,” Marie-Pierre Poirier, UNICEF’s regional director for West and Central Africa, said in a statement.

“UNICEF is concerned by the escalation of the conflict in the North-West and South-West regions of Cameroon and calls on all parties to allow humanitarian access to people in need in the affected areas.”

READ MORE: NOT HAVING IT: Whoopi Goldberg slams Abby Huntsman for praising Trump

The latest UN report says said there are some 437,000 “internally displaced people in Cameroon’s southwest and northwest regions.”

“In November 2017, the socio-political crisis progressively translated into insecurity and armed violence,” the UN Office for the Coordination of Humanitarian Affairs reported in May 2018.

“Since then, the escalation of tension and upsurge in hostilities between non-state armed groups and defence and security forces have triggered humanitarian needs across the two regions, linked to significant internal displacement.”