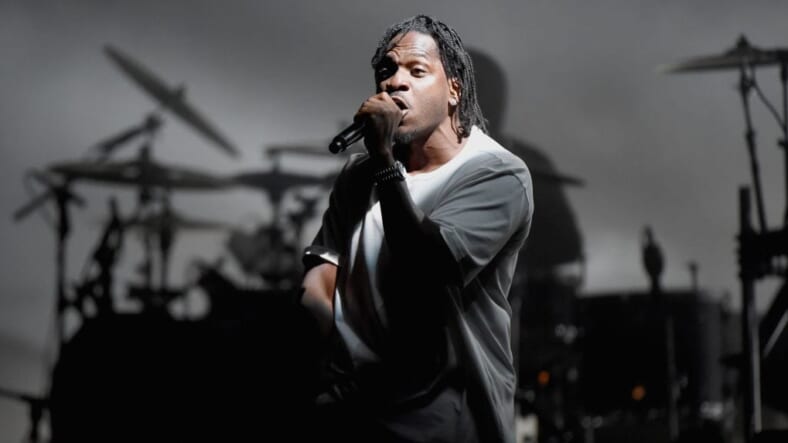 Pusha T didn’t get a very warm welcome when he performed on Drake‘s home turf on Tuesday.

The rapper was onstage at Danforth Music Hall in Toronto when fans started throwing drink at him. Moments later, a few folks seemed to try to rush the stage and a brawl erupted on the floor while Pusha T ducked out of harm’s way.

The Best Rap Battle Since Jay-Z vs Nas: A full timeline of the Drake, Pusha T beef

Several sources say the culprits were yelling at Pusha T about Drake before the drama began, so we’re guessing it may have had something to do with the long-standing beef between the two rappers.

Pusha T returned to the stage after the fight was broken up and balked at the attempt to  disrupt his show and he performed two additional songs while surrounded by security before his set was over.

According to TMZ, police are investigating the incident that sent three people to the hospital for injuries. So far, no arrests have been made.

Check out some footage of the ordeal:

The guys who threw beer at Pusha T got messed up REAL QUICK https://t.co/rjQmkH5SGt
(via @The_NRNN)

Pusha T and Drake have a long history of beef.
Less than 24 hours after Pusha-T released his Kanye West-produced album, DAYTONA, Drake dropped the diss track, “Duppy Freestlye” following Pusha-T’s claims that the Toronto rapper doesn’t pen his own rhymes.

“If you rebuke me for working with someone else on a couple of V’s, what do you really think of the nigga that’s making your beats?” raps Drake. “I’ve done things for him, I thought that he never would need/Father had to stretch his hands out and get it for me.”

Drake later hit Pusha-T with an invoice for $100,000, citing “Promotional assistance and career reviving” as reasons.

But the rappers’ feud only escalated from there when Pusha-T dropped “The Story of Adidon” on Tuesday (May 29), using a photo of Drake in blackface dating back over a decade ago.
The two have been going back and forth ever since and it seems like some of Drizzy’s fans in Toronto don’t take kindly to Pusha T’s disrespect to their hometown hero.