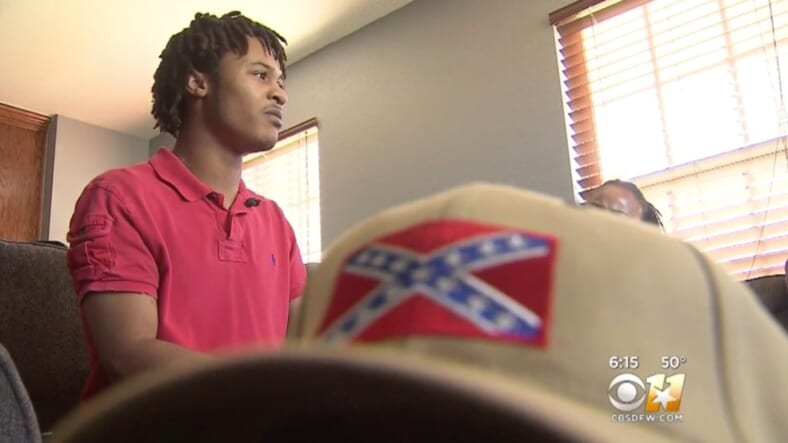 A mother is outraged and denouncing a white coach who reportedly ordered her autistic son to wear a cap emblazoned with a Confederate flag. The young man was playing for a Special Olympics flag football team in Lewisville, Texas.

It was not a laughing matter to Amelia Mornes-Njoka, who said the coaches have lost her trust after telling her son, Austen Mornes, to wear the hat because it represented “freedom.”

“Everybody just kind of went into an uproar because he comes in wearing this hat like it’s just a regular hat,” Mornes-Njoka told local news station CBS-DFW.

READ MORE:  Grieving family of man killed by police at Alabama mall speak out: ‘I will never hear him say, mom, I love you’—

Austen in fact didn’t know the meaning of the flag, Mornes-Njoka said.

His mom said the coaches were misleading and took advantage of her son.

“My worst feeling was they were sitting there watching him and probably snickering or laughing under their breath,” Mornes-Njoka told the station.

Austen, 21, had been playing with the team for the last eight years, his mom said.

The Lewisville Independent School District released this statement about the matter.

“The adult volunteer, who is not an LISD employee, was wearing a cap the former student expressed interest in,” LISD said in a statement. “The student took the cap home. The volunteer coach contacted the parents to discuss what happened, and believed the situation had been resolved to everyone’s satisfaction.”

Mornes-Njoka said that now her trust is broken, she doesn’t intend to allow her son to play on the team.

“You trust these people with your kid who has a disability,” she said. “You know and as far as I knew, I knew them well enough for my son to be around them without my supervision.”