VIDEO: Grieving family of man killed by police at Alabama mall speak out: ‘I will never hear him say, mom, I love you’ 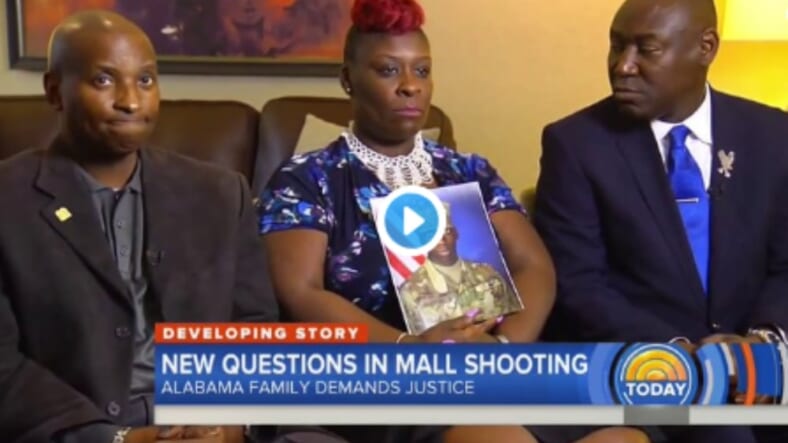 The family of Emantic Fitzgerald Bradford Jr., a Black US Army combat engineer who was killed in a Alabama mall after police killed him in a Alabama mall shooting in a case of mistaken identity says that trigger happy cops racially profiled the military man.

“He saw a black man with a gun and he made his determination that he must be a criminal,” civil rights attorney Benjamin Crump said on CNN Sunday. Crump is representing the grieving family.

“They concluded their investigation while EJ was (lying) on the mall floor, bleeding out, dying. … There’s a murderer on the loose largely because police rushed to judgment.”

The family and Alabama community is outraged after Bradford Jr., 21, was gunned down by police inside the Riverchase Galleria in the Birmingham suburb of Hoover. He was holding a handgun, which his father said he was ;legally allowed to do and was running away from the scene of the shooting before he was fatally shot by responding officers. He reportedly was involved in the altercation that led to the shooting of a 12-year-old girl and an 18-year-old male Thanksgiving night, but he was not the gunman who fired the rounds that wounded the victims, AL.com reported.

“I will never be able to see my son’s face again or to look into his eyes or to hear him say, mom, I love you,” said Bradford’s mother adding, “no-one has even reached out to us in any type of way.”

“I will never be able to see my son’s face again or to look into his eyes or to hear him say, mom, I love you,” says the mother of the man mistakenly killed by police in an Alabama mall, adding, “no-one has even reached out to us in any type of way.” https://t.co/Cethd0mQcD pic.twitter.com/puqdlcsGd0

Immediately after Bradford was gunned down, police named him as the shooter, something his family said contributed to ruining his good name.

“Not only did they assassinate his person, but they truly assassinated his character,” Crump said.

“They knew it wasn’t true even before the police retracted their statement,” Crump said.

“I feel like you should’ve reached out to me and his mother, but nobody did,” Bradford said. “That’s not protocol for you just to do something, kill my child and not respond when we’re calling you,” said Bradford’s father, who spent 25 years as a correctional officer.

“He considers law enforcement to be family, but they are not treating him like family,” Crump said of the senior Bradford. “They haven’t offered him the courtesy of letting him know anything.”

Police admit they got it wrong when they shot and killed Bradford and identified him as the gunman, and the hunt is now on for at least one suspect still at large who may be responsible for the Alabama mall shooting.

“New evidence now suggests that while Mr. Bradford may have been involved in some aspect of the altercation, he likely did not fire the rounds that injured the 18-year-old victim,” Hoover police Capt. Gregg Rector told the newspaper.

Police previously told reporters that Bradford was the shooter of the two victims but the investigation determined otherwise.

“We regret that our initial media release was not totally accurate, but new evidence indicates that it was not,’’ Rector said. “We remain committed to maintaining the integrity of this investigation, helping determine the facts involved …”

Alabama family demands justice after police responding to a gunman at a mall on Thanksgiving shot and killed a young black man — but now evidence suggests the young man was not the shooter. pic.twitter.com/TBII8im5Qx

While police in Alabama are searching for the gunman, activists marched outside the mall demanding justice.

“Where is the bodycam footage — why we ain’t seen it yet,” said one protester. “They said they he killed a man and injured somebody else, they called him a suspect, what are they saying now … where are the cameras?”