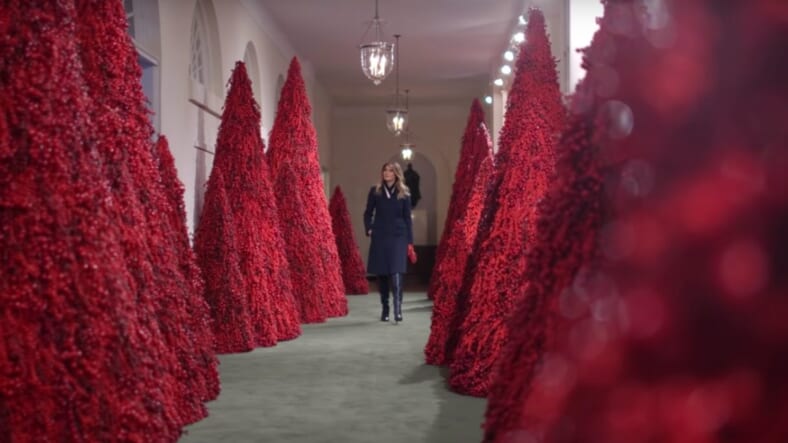 Every holiday it is tradition for conservatives to suddenly start complaining about what they believe is the “War on Christmas,” a time-honored talking point where the far right accuses liberals of impeding the rights of Christians and Christmas lovers everywhere. But now there seems to be more so of a war on decor. Blood red, decor that is eerily reminiscent of The Handmaid’s Tale to be specific.

READ MORE: Allegations of Dwight Howard’s messy sexual affair with trans women begs the question, who gets to define and claim ‘real’ womanhood?

This week, the First Lady unveiled the White House’s official Christmas decor, which features 29 red Christmas trees, an aesthetic that some have joked is a perfect visual representation of how much President Donald Trump’s administration – whose disapproval numbers are now plummeting to 60% – has been bleeding out staffers and scandals all year.

Despite those “Is Melania trying to tell us something?” speculations, according to the White House press release, “The First Family is celebrating their second Christmas in the White House. This year’s theme, “American Treasures” honors the unique heritage of America. Designed by First Lady Melania Trump, the White House shines with the spirit of patriotism. This home, held in trust for all Americans, displays the many splendors found across our great Nation.”

As for the shockingly dramatic color choice, the press Release goes on to explain, “Crossing in to the Grand Foyer and Cross Hall, patriotism, the heart of America, takes center stage with more than 14,000 red ornaments hanging from 29 trees.  The choice of red is an extension of the pales, or stripes, found in the presidential seal designed by our Founding Fathers.  It’s a symbol of valor and bravery.”

They may say that red forest is a symbol of bravery, but because the internet is swift as heck (and remains undefeated) in it’s ability to mock anyone and anything at a moment’s notice, a legion of clever memes about Melania’s bloody trees have already taken over social media.

Below are a smattering of our faves from just the last 24 hours since visuals of the White House’s holiday makeover were released.

READ MORE: Rihanna fans warn Chris Brown to stay away after he comments on her IG photos

Someone did this to Melania Trump’s creepy Christmas trees, and it’s all I’ve ever wanted today. pic.twitter.com/MwigcZxswR

Decorator: Okay, so we want to avoid looking like the entrance to the White Witch's Narnian castle like we did last year.

Melania: What about red?

Decorator: Sure, red ornaments are cheerful!

Melania: No. The trees. Red.

I think Melania Trump’s Christmas decor choices might be a cry for help. pic.twitter.com/LupbOJTogS

I made Melania’s Christmas decor a little less terrifying. pic.twitter.com/VaK5UJpQA1

I saw this earlier; let me dig through to see who it was. pic.twitter.com/zVxGZGWXHK

Melania's decorator guarantees that this Christmas your suffering will be legendary even in Hell. pic.twitter.com/ohR71tH9q2