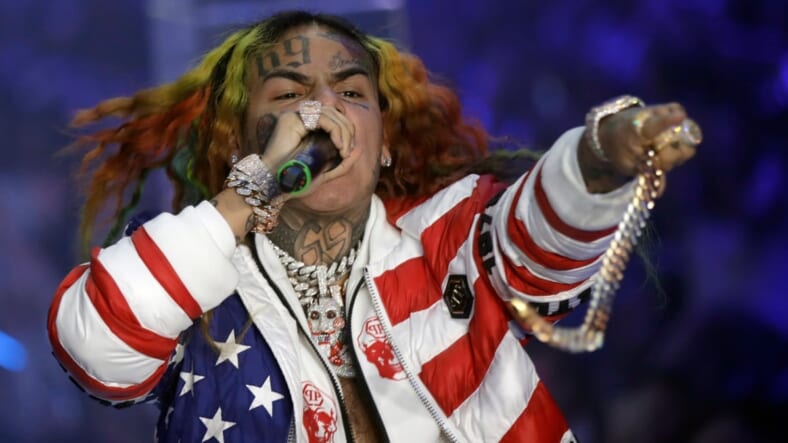 After pleading guilty to posting a video online of a 13-year-old girl performing a sex act, rapper Tekashi 6ix9ine, 22, is expected to be re-sentenced next week.

6ix9ine, whose real name is Daniel Hernandez, recently earned his first Top 5 hit on the Billboard Hot 100 with “Fefe” featuring Nicki Minaj and Murda Beatz. His debut album, Dummy Boy, was released just four days ago, receiving mostly negative reviews from music critics, who wrote that Tekashi69 “repeatedly gets shout out by his collaborators and sounds like a visitor on his own album.”

In October, the Brooklyn rapper was sentenced to carry out 1,000 hours of community service and four years probation, according to PageSix.

Pitchfork reports that the Manhattan District Attorney’s Office was “pushing for him to spend one to three years in state prison and register as a sex offender.”

Earlier this month, Tekashi 6ix9ine, who’s known for his distinct rainbow-dyed hair, was indicted on federal racketeering and firearms charges. However, the controversial rapper, who is thought to be a member Nine Trey Gangsta Bloods, was not present during the “closed-door conference Friday with Justice Felicia Mennin, prosecutors or his defense lawyer when the decision was made,” reports PageSix.

If convicted, he faces a possible life sentence in prison.

“As alleged in the indictment, this gang, which included platinum-selling rap artist Tekashi 6ix9ine, wreaked havoc on New York City, engaging in brazen acts of violence,” said U.S. Attorney Geoffrey S. Berman in a press release. “Showing reckless indifference to others’ safety, members of the gang were allegedly involved in robberies and shootings, including a shooting inside the crowded Barclay’s Center, and a shooting in which an innocent bystander was hit. Thanks to the extraordinary work of HSI, ATF, and the NYPD, the defendants will now face justice in federal court.”