"[M]y biggest pieces of advice would be to take some time and don’t be in a hurry to do anything," she said. 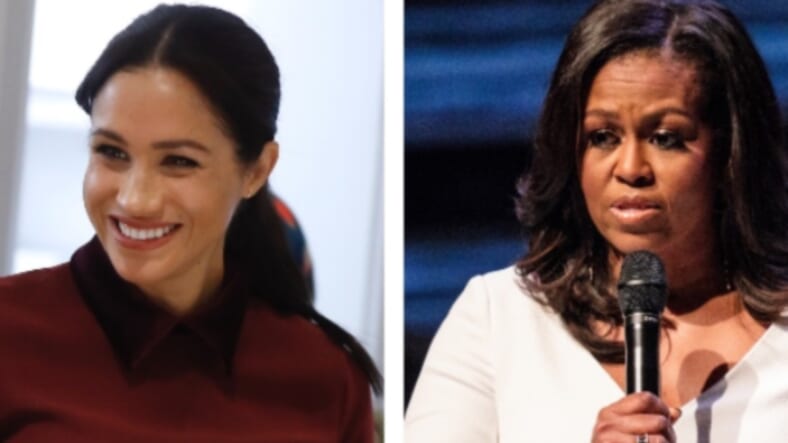 As rumors swirl about Meghan Markle reportedly having difficulties getting along with her sister-in-law Kate Middleton, former First Lady Michelle Obama offered some sisterly advice to the Duchess of Sussex, the IBTimes reports.

“Like me, Meghan probably never dreamt that she’d have a life like this, and the pressure you feel—from yourself and from others—can sometimes feel like a lot,” Obama said in an interview with the Sunday Mirror (via Express). “So my biggest pieces of advice would be to take some time and don’t be in a hurry to do anything.”

Obama surely understands the pressures of being in a high-profile position. With Markle being pregnant, it makes for an intense time for the expecting mom.

Obama shared her understanding as a mom who worried much about her daughters and how they were getting acclimated to life at the White House when her husband first took office. Along the way, she said she also made new friends and made her work and mission a priority.

“What I’d say is that there’s so much opportunity to do good with a platform like that—and I think Meghan can maximize her impact for others, as well her own happiness, if she’s doing something that resonates with her personally.”

Obama such an understanding lady and so relatable as see this past weekend when she shocked a crowd during her Becoming book tour by showing realness with a mere slip of the tongue.

“And it’s not always enough to lean in, because that s*** doesn’t work all the time,’” Obama said speaking about how to fuse equality and respect work in the workplace. The crowd of course went wild with Obama realness and the tongue slip. She apologized and said, “I forgot where I was for a moment.”

But she gets a pass, no matter.

The Twitterverse went spiraling after Obama spewed the “s” word.