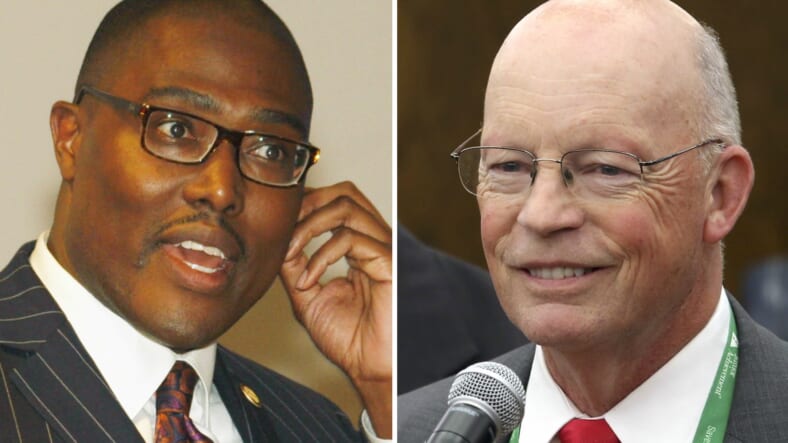 From left, Frank Scott and Baker Kurrus. (The Arkansas Democrat-Gazette via AP)

Scott served as an adviser to former Gov. Mike Beebe and on the state Highway Commission, and he assembled a coalition that crossed racial and political lines. His supporters included Democratic state legislators from the area and prominent Republicans such as Will Rockefeller, grandson of Arkansas’ first Republican governor since Reconstruction. He also was endorsed by New Jersey Sen. Cory Booker, a Democrat who’s considering running for president in 2020.

Scott had said he wasn’t running to be Little Rock’s first elected black mayor , but had sought to bridge some of the city’s biggest divides: race, income and geography.

“If you believe it’s time to unify this city, let’s do it,” Scott told supporters Tuesday night.

Little Rock has had two black mayors, but they were elected city directors chosen for the job by fellow board members and not by voters. Some voters Tuesday said they hoped electing Scott would send a message about Little Rock.

“I just thought maybe it would help race relations in our town, which is not very good right now,” said Mary Leckie, a 73-year-old white retiree who voted for Scott.

Scott’s election comes as race remains a dividing line in Little Rock, long after nine black students were escorted past an angry white mob into Little Rock Central High School in 1957. The city’s police department has faced questions about its tactics, including its use of “no-knock” warrants . The state took over the Little Rock School District three years ago, and community leaders have compared the takeover to Gov. Orval Faubus’ efforts to block integration.

Kurrus, a 64-year-old attorney and businessman, had been appointed superintendent of the district after the takeover. His contract wasn’t renewed after he opposed the expansion of charter schools in the district, a move that rallied Democratic lawmakers and community leaders to his defense. Kurrus, who is white, had also called unifying the city one of his goals in the campaign.

“Let’s don’t give in to the things that divide us. Let’s get together, work hard and make this a better place,” Kurrus told supporters after conceding the race.

Scott’s election makes him the highest-profile black official in a state that hasn’t elected an African-American to Congress or statewide office since Reconstruction. Blacks make up about 42 percent of the city’s population, compared to nearly 16 percent statewide.

Scott and Kurrus advanced to a runoff last month after Scott won a plurality of votes in a five-person race but a few percentage points shy of the 40 percent needed to win outright. Both Scott and Kurrus ran on a promise of change. Stodola, the outgoing mayor, was first elected mayor in 2006.

“It’s not a black or white thing with me,” said Lula Binns, a 75-year-old black retiree who voted for Scott. “It’s just time for some younger blood.”

Scott’s election comes after a year where African-Americans have made gains elsewhere in Arkansas. Pulaski County, where Little Rock is located, this year elected its first black sheriff and clerk. Several other Arkansas cities have also elected their first black mayors this year.