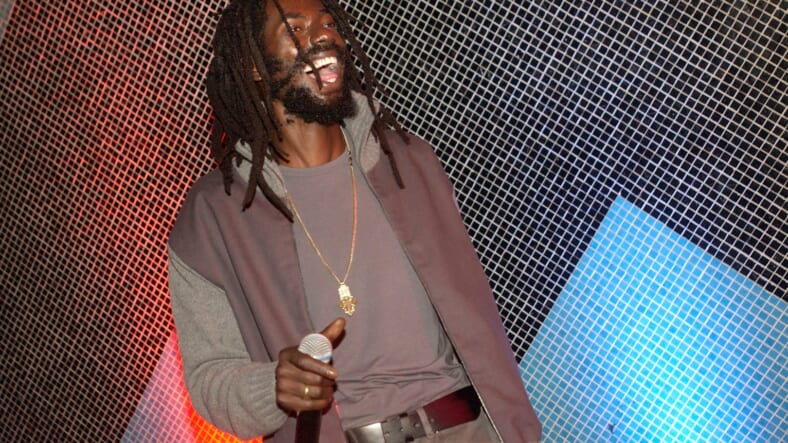 Buju Banton performs at the Benefit Party after the NY Benefit Premiere of 'The Agronomist' on April 13, 2004 in New York City. (Photo by Scott Eells/Getty Images)

The 45-year-old reggae star– born Mark Myrie — was freed Friday, a prison official told the Tampa Bay Times, and video of Banton boarding a plane was published on Twitter. He was expected to return to his native Jamaica and various clips online show him greeting fans near his Red Hills Road studio in Kingston.

The Guardian wrote that Banton would be the “most eagerly awaited arrival in Jamaica since Ethiopia’s Emperor Haile Selassie touched down in April 1966.”

The Grammy award-winning icon was convicted in a Tampa courtroom in 2011 on federal drug charges and sentenced to 10 years imprisonment. He was reportedly the target of an undercover federal informant for more than a year. Prosecutors required two trials to convict the Dancehall star. His initial release date was February 2019, but was later revised to December 8, 2018.

Buju recently released a statement saying that upon release he plans to focus only on his artistry.

“Having survived, I want to share the good news and strength of my music. I just want to continue making music, which I’ve devoted my life to. I look forward to the opportunity to say a personal thanks to my fans and everyone who supported me,” Buju said.

Jamaica’s culture minister, Olivia “Babsy” Grange, says Banton “is now really about, from what we understand, employment of young people. If he can help shape and resocialize young people, that is something we should embrace.”

But the minister of national security, Horace Chang, cautioned against giving him “ a hero’s welcome.”

“He committed a crime,” Shang added. And Grange agrees, “There’s no getting over the fact that he was convicted, but Buju was loved long before he was convicted and he will be loved just the same, even if he comes home in handcuffs.”