The funds raised through the site will go directly to Britany Jacobs to help the tragically single mother of four to provide for her family. 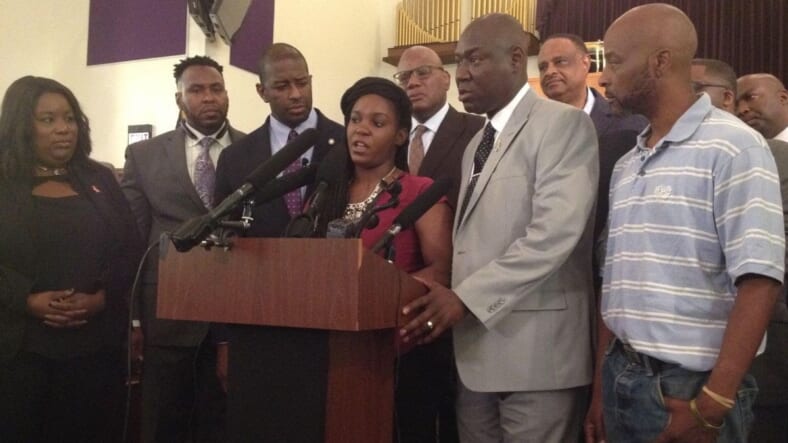 National civil rights attorney Ben Crump has announced a new GoFundMe campaign to raise funds for Britany Jacobs, the pregnant girlfriend of Markeis McGlockton, the young Black male who was fatally shot outside a convenience store in Clearwater, Florida in July 2018.

Jacobs was left a single mother after McGlockton was gunned down by Michael Drejka over a handicapped parking spot at the Circle A store, and the tragedy made national headlines when the Pinellas County Sheriff’s Office did not arrest or charge Drejka on the basis of Florida’s “stand your ground” law.

“It’s ludicrous you can claim you have fear of your life but yet you approach and start the confrontation,” Crump previously explained.

“Just imagine if the roles were reversed and you had a black man approach a white woman sitting in the car with her two white toddler children in the back seat. If the white father came out to protect his family and shot this strange black man who approached their car, does anyone doubt that he would have been arrested and taken to jail?”

While Drejka now awaits his August 2019 trial on a manslaughter charge in this case, Crump continues to seek justice and aid for his client, Jacobs. During a press conference on Friday, it was revealed that she is pregnant with McGlockton’s child, their fourth together.

“Britany is a young mother who has endured unbearable loss because of a quick-triggered bully who has tried to hide behind Florida’s outrageous and racist ‘stand your ground’ law. This child will never know his or her father. Britany must go on, raising four children, without the support and care her beloved life partner Markeis provided so well for them,” Crump said. “We implore our community to support this GoFundMe effort to help ease the burden on our dear sister, especially in this holiday season.”

You can make a donation to the GoFundMe campaign for Britany Jacobs at gofundme.com/mcglockton-memorial-fund.

According to a press release, funds raised through the site will go directly to Jacobs to help cover the cost of providing for her family. None of the donations will be used for legal fees or expenses related to the manslaughter case.

During the press conference, Crump also addressed recent news that the Florida Supreme Court has ruled police can now be declared immune from prosecution under the newly extended “stand your ground” law.

“The ‘stand your ground’ law is a huge problem, now made even worse by a Florida Supreme Court ruling this month that extends its protections to law enforcement,” Crump said. “‘Stand your ground’ was sold to us as a law that extends protection to people who defend their homes, not one that provides blanket protections for police officers who err in the course of their sworn duty. I respectfully believe the Supreme Court got it wrong on this case. The police have enough legal protections. Innocent black Americans who are the frequent victims of implicit bias do not. It’s time to repeal or revise ‘stand your ground’ before more blood is shed.”