Much to the embarrassment of right-wing critics, the brand announced it had surpassed sales goals, leading to a market surge. 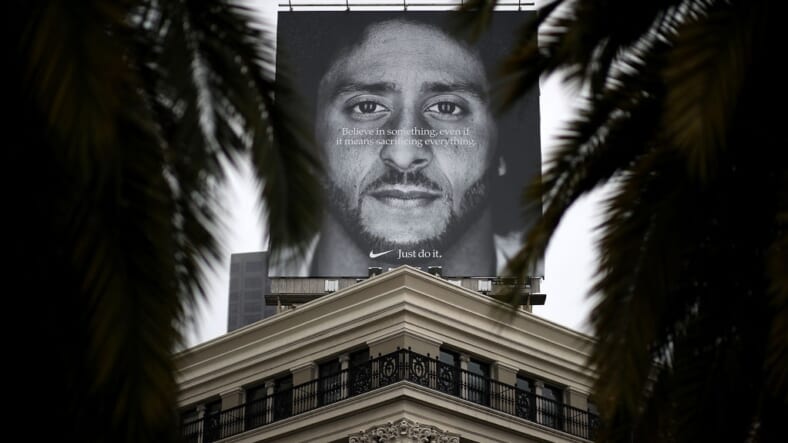 Right-wing haters were sure Nike faced certain doom after making Colin Kaepernick the face of a new ad campaign, only to see the company stock soar and the sports apparel giant post better-than-expected second-quarter sales.

While the company’s stock briefly took a hit in the days following the campaign’s launch of the “Just Do It” advertisement featuring Kaepernick in September, the bounce back was swift and Nike announced it had surpassed sales goals, leading to a market surge reported on Thursday. As noted by the New York Post, shares reached 7.2 percent increase, to close at $72.37 Friday.

“It looks like a real rebuke for folks who said, ‘We’ll boycott Nike,'” University of Michigan business school professor Jerry Davis told ABC News. “It turns out Democrats buy a lot more sneakers than Republicans. The demo that is willing to spend $200 on Nike sneakers is not the demo that’s going to boycott them because of Kaepernick.”

The report found Nike’s revenue increased in nearly every category for the quarter, with sales in the U.S. up nine percent.

“We find that the more disruptive we are, the more we grow,” Mark Parker, Nike’s chief executive officer, said on a call with analysts Thursday, referring also to the brand’s focus on digital sales.

According to the report, investors were concerned that trading tensions between the U.S. and China would negatively impact sales. Instead, Nike saw a 26 percent jump in sales in China for the quarter.

“We have not seen any impact on our business from some of the US-China dynamics that we’re all reading about,” Andy Campion, chief financial officer at Nike, said Thursday.

Conservative commentators predicted that while the campaign might sell well overseas, stateside it would be an epic fail.

Fox & Friends dubbed Kaepernick’s “Just Do It” ad as an “attack on the country,” while Fox Sports host Clay Travis penned an op-ed for USA Today declaring financial doom for the company.