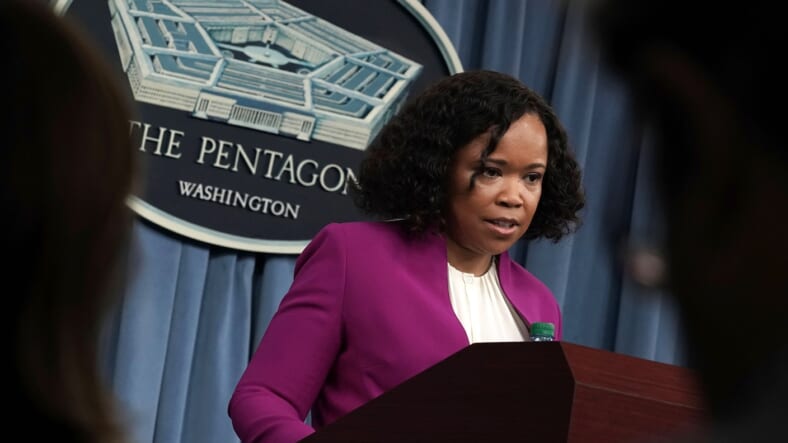 Pentagon Chief Spokesperson Dana W. White speaks during a news briefing at the Pentagon April 14, 2018 in Arlington, Virginia. The Pentagon held a briefing on the latest development of the strike in Syria. (Photo by Alex Wong/Getty Images)

The house of cards seems to have come crashing down for one top Pentagon spokeswoman who resigned on New Year’s Eve amid an internal probe.

According to NBC News, Dana W. White was being investigated by the Defense Department’s inspector general for misconduct and abuse of power before her abrupt departure. She announced her resignation New Year’s Eve on Twitter.

“I appreciate the opportunity afforded to me by this administration to serve alongside Secretary Mattis, our Service members and all the civilians who support them. It has been my honor and privilege,” White tweeted on Monday.

—Former backup singer of R. Kelly says she witnessed him having sex with underaged Aaliyah—–

NBC News previously reported that White had been accused of having Pentagon staffers handle her personal affairs, such as buying her personal items at the CVS, driving her from home to work during bad weather, picking up her dry cleaning and meals, scheduling her grooming appointments and planning personal trips. She even had them inquire with a foster care facility about adopting a child, sources told the publication.

Pentagon ethics guidelines state: “a DoD official may not direct or request subordinates to use official time to perform any activities other than official activities.”

Investigators were also looking into allegations that White retaliated against at least four DoD employees who complained about her conduct.

“It is with a heavy heart that I have submitted my letter of resignation to Secretary Mattis. I am grateful to the administration for giving me the opportunity to serve alongside Secretary Mattis, the brave men and women in uniform, and all of the civilians who support them,” the message read, according to a copy obtained by CNN.

On Tuesday, Charles Summers Jr. is set to become acting assistant to the defense secretary for public affairs, according to the Pentagon.