An African American man was seen on viral video fearing for his life as an attacker threatened him, whose criminal charge so far seems light 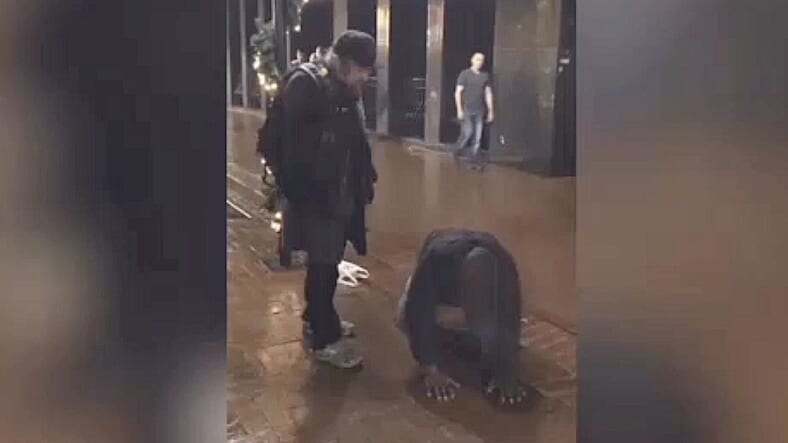 A white man was caught on video holding a knife to a Black man’s neck in downtown Charlottesville, Virginia as onlookers stood by.

The disturbing ordeal playing out in a now viral video showing the man holding the victim at knifepoint before forcing him to kneel as he taunted him with a knife, local station WVIR reports. It is unclear what prompted the attack.

Downtown CHARLOTTESVILLE right now. F*ing white trash has a black man submitted first with a knife around his neck, then makes him kneel still threatening to stab him.
Please, Twitter do your thing in the name of justice #resist @washingtonpost @MSNBC pic.twitter.com/klg7g5ac22

On the video you can hear a bystander yelling at the man, and one even came over to the Black man as he was bent down on all fours. But no one intervened as the man continued to terrorize the victim.

Charlottesville Police were called and can be seen arresting the man as he drops his knife and a bystander kicks it away. The officers apprehended him without incident.

The victim suffered a cut on his hand and WCAV reports his attacker was arrested for attempted malicious wounding, but so far has not been charged with any other crime despite the potential threat. He was also taken to Western State Hospital for a mental evaluation, according to authorities. The names of both men have not yet been released.

“After further investigation and viewing video of the incident, the officers obtained a warrant for attempted malicious wounding,” Sergeant Tony Newberry told WCAV. “Service of that warrant will be coordinated between police and the hospital.”

An investigation is still taking place.

Charlottesville was ground zero for the Unite to Right rally in 2017 when hundreds of white nationalists gathered on August 12  to protest the city’s plan to get rid of the statue of Confederate General Robert E. Lee.

A 32-year-old activist, Heather Heyer, was killed when a white supremacist drove his car into a group of protesters.