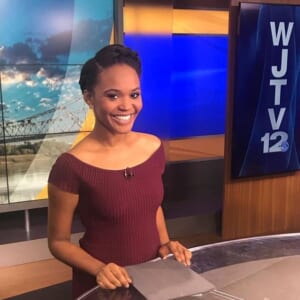 A black television news anchor took to Medium to detail how she was wrongly terminated after filing complaints against her bosses at WJTV This Morning in Mississippi who told her look from her natural hairstyle, which they deemed “unprofessional,” to that of “a beauty queen.”

Brittany Noble-Jones, a former co-anchor for WJTV, was hired by the station after she was named the 2015 Emerging Journalist of the Year by the National Association of Black Journalists (NABJ). Noble was recognized for her interview that aired on KMOV-TV, a CBS affiliate in St. Louis, with the mother of police shooting victim Michael Brown in Ferguson, Mo.

“In the beginning, it was a normal work environment,” Noble-Jones, originally from St. Louis tells Yahoo Lifestyle. “But after I volunteered to appear in a company-wide promo in March 2017, my boss told me, ‘People here think you’re into yourself’ but he wouldn’t give me specific examples.”

The 32-year-old said she began noticing that she was being treated differently than her colleagues. Many of her news pitches — timely stories about race relations in Mississippi — were passed over, allegedly because they “are not for all people.”

When Noble-Jones told her boss she was three-months pregnant, she said she felt even more ostracized at work. She wrote on Medium, “After announcing that I was pregnant, I was no longer included in commercials. I felt the need to starve myself to fit in. I now weigh only 108 pounds. I did eat while I was pregnant and while carrying my son and postpartum, I wasn’t allowed to represent the station and my events were given away to another white reporter.”

But after her son was born and Noble-Jones returned from a seven-week maternity leave, she was told that wearing her natural hair would be a problem, according to Yahoo Lifestyle.

“Women in this industry, particularly black women, feel forced to look a certain way by straightening their hair or wearing extensions,” Noble-Jones tells Yahoo Lifestyle. “I usually wore a wig on camera, which was my idea, because I could style it without damaging my real hair.”

However, as a reading ambassador for kids in the public school system, Noble-Jones felt guilty about her image. “Here I am in a predominantly black city, and a school representative, and I’m not even showing my real hair to black children?” she tells Yahoo Lifestyle.

By June 2017, the office environment was intolerable, according to Noble-Jones, who filed a complaint against two supervisors with parent company Nexstar Media Group. One boss was allegedly fired two months later but her new supervisor, she claims, adopted the same discriminatory treatment.

Noble-Jones filed a second complaint in September alleging that as a breastfeeding mom, she wasn’t provided adequate breaks to pump milk and was told to use a storage closet for which she had to request the key on each occasion.

In April 2018, Noble-Jones lodged her complaints with the U.S. Equal Employment Opportunity Commission (EEOC), a federal agency that oversees civil rights in the workplace. The next month, while Noble-Jones was out using her accrued sick days to care for her dying grandfather in St. Louis, she said she was fired.

Noble-Jones says her case is currently on hold amid the government shut-down. She has also stated exclusively to theGrio that she has willingly turned in the full recording of her bosses comments to CBS and NABJ this week and producers are currently investigating. Recordings she states Nexstar has had since 2017.

When reached by Yahoo Lifestyle, a representative of Nexstar declined to comment.

I told myself I would no longer live in fear in 2019. I went to my childhood church with my son, mom and grandma Sunday. The choir sang “encourage yourself.” Then my Pastor began preaching about gifts. What Unused talents are in the building he asked us. He also said your talents can multiply. You don’t want to get before the king- who gave you the gift- & tell him you didn’t have the guts to use it for his glory. I never claimed to be a writer, I had producers ?But I got on periscope, played ?encourage yourself & wrote a post on medium finally telling Mississippi why I was forced out. It went viral y’all. I mean… yeah. It never occurred to me that people may think the stuff I said was untrue. I am a reporter & the daughter of two investigators. I told Nexstar the day I filed my first complaints that I had recordings. I endured a 2 month investigation working under the bosses I complained about. Nexstar told me my boss never said it. “I told you I have recordings” I said. The next day my boss was gone after I logged just one. That was back in 2017 – & that’s when the retaliation began. When I reached out to Nexstar for help they told me, “you shouldn’t be expected to be treated fairly when you go around recording people.” I repeatedly stopped by the EEOC begging for help. Keep me lifted as I share my story. @sarahjakesroberts It was your sermons that pulled me out of depression, a toxic marriage, and fear giving me the strength to do what I know I’ve been called to do. There has been a massive outpouring of support. I am encouraged by the amount of believers of all shades standing with me. ?There’s an army rising up to break every chain. ??‍♀️ Link in bio.