Seventy years ago in Groveland, Fla., Ernest Thomas, Samuel Shepherd, Charles Greenlee and Walter Irvin were accused of rape, they have now been pardoned. 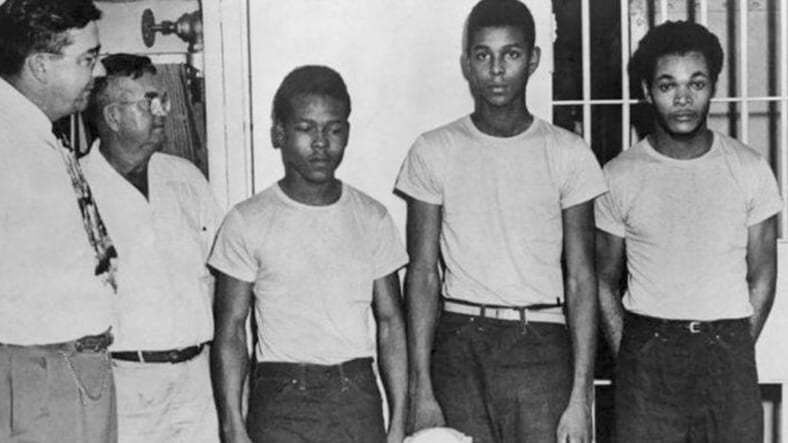 Lake County Sheriff Willis McCall, far left, and an unidentified man stand next to Walter Irvin, Samuel Shepherd and Charles Greenlee in Florida in this unddated photo. (State Library and Archives of Florida via AP)

The four young black men who became known as the Groveland Four after being falsely  accused of raping a white woman in 1949 were pardoned by Florida Gov. Ron DeSantis and his three-member cabinet.

The Florida Cabinet met as the state Clemency Board on Friday and listened to family members of the men who over the past 70 years were tortured, imprisoned, or murdered by a racist sheriff and a mob of angry white men. One of the four young men died at the hands of the mob before he could be charged, while the other three were convicted by all-white juries on tainted and dubious evidence.

“I believe in the principles of the Constitution. I believe in getting a fair shake,” DeSantis said. “I don’t think there’s any way that you can look at this case and see justice was carried out.”

—Senator Marco Rubio calls for the pardon of the Groveland Four—

In 1949, Norma Padgett, a 17-year-old white woman, and her estranged husband told the police that she’d been kidnapped and raped by four black men after the couple’s car broke down outside Groveland, in Lake County, according to The Miami Herald. Sheriff Willis McCall arrested the four men, even though one of the teenagers, Charles Greenlee, 17, had been previously arrested in a separate incident that was 20 miles away when the alleged rape took place and said he didn’t know the other three men.

Two of the young men, Samuel Shepherd and Walter Irvin, told police they had stopped to help the couple but denied assaulting Padgett. Still, they were badly beaten by police in the county jail, until both Greenlee and Shepherd confessed. The fourth man, Ernest Thomas, escaped but was murdered two days later by an angry mob of 1,000 men who shot and killed him while he slept under a tree in Madison County, according to the Miami Herald.

After Thomas’ murder, the other three men were convicted by all-white juries. Irvin and Shepherd were sentenced to death, and Greenlee was given a life sentence. In 1951, two years after the court sentences were meted out, the U.S. Supreme Court ordered a retrial. While the sheriff was escorting Shepherd and Irvin to a court hearing, he pulled over on the side of the road and shot the two men, according to The Miami Herald. Shepherd died, but Irvin pretended to be dead. The sheriff said they tried to escape, but Irvin said they were shot while they were handcuffed to each other and lying on the ground.

During Friday’s hearing, Wade Greenlee, the younger brother of Charles who had traveled to Tallahassee from Jacksonville, said his brother was framed the way many black people were in the Jim Crow South.

“We all know how things were back then,” he said. “All you had to do was be black. The reason we’re here today is because Irvin didn’t die. God allowed him to live to tell the story.”

“It never happened, Miss Padgett,” she said, according to the Miami Herald. “You and your family are liars.”

Padgett was accompanied by her sons and was wheeled to a microphone to speak.

“I’m the victim of that night. I tell you now, that it’s been on my mind for 70 years. I was 17 years old and it’s never left my mind,” she said, her sons standing behind her, according to the Miami Herald. “I’m begging y’all not to give the pardons because they did it. If you do, you’re going to be just like them.”

In 2017, the Florida Legislature unanimously passed a bill asking former Gov. Rick Scott to go ahead and pardon them. Although Scott didn’t, DeSantis did.