Don't miss the hilarious stand-up special on HBO on January 26. 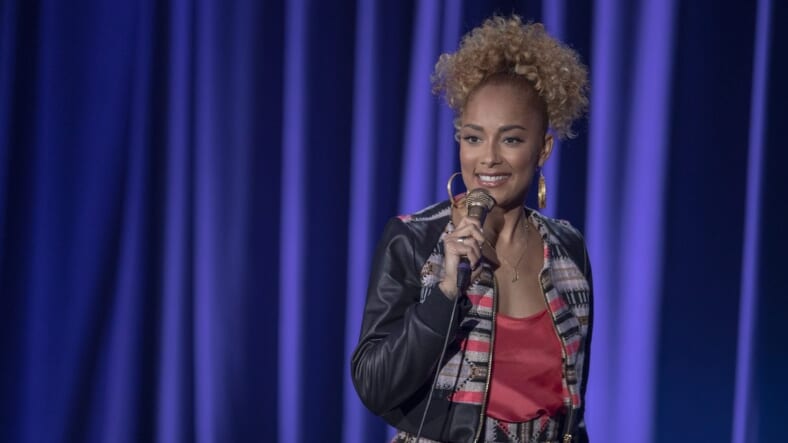 Amanda Seales is playing no games in her first HBO stand-up special, I Be Knowin’.

The Insecure star solidifies her spot as comedy Queen in the hour-long special that delivers a steady flow of side-splitting laughs sprinkled with poignant social commentary.

In the first moments of the special, Seales attempts to answer Who is this stand-up special for? The answer is ALL of us. I found myself cackling at a rapid rate while repeatedly thinking, ‘GET OUT OF MY BRAIN, AMANDA!’

She does, indeed, be knowin’ the silly little secrets we women rarely discuss but often employ and she provides a spot-on synopsis of what it’s like to be a 30-something Black woman in America today.

Whether she’s riffing on the pathetic pick-up lines that constantly await her while walking the streets of NYC or showing off her surprisingly strong singing voice while leading the crowd in the “Negro National Anthem” (if you don’t know what this is, you better ask somebody before you watch with your friends), Seales is effortlessly funny, smart, and entertaining.

She’s also striking. Not that we didn’t already know that this talented woman is a beauty, but she’s serving up some serious face throughout the special, especially when she’s channeling her inner gay man, or impersonating her high school BFF.

Amanda Seales ia ALL of us and if you don’t see some of yourself in her act, it’s likely you see a chick you would love to kick it with on the regular.

“I Be Knowin’ is 37 years of finding the funny, culminating in an hour, and my HBO family being the place where I get to share it, makes this, my first special, even that much more special,” Seales said in a statement in November.

Aside from her stint as a cast member on Insecure, Amanda Seales also serves up laughs and insight on her weekly podcast, Small Doses and is currently touring with the the live comedy competition show she created, Smart, Funny & Black.

Check out a sneak peek of the must-see stand-up special.

I Be Knowin’ premieres January 26 on HBO.