Judge: Birmingham has right to erect barrier around Confederate monument

Despite the controversy surrounding erection of a barrier around a confederate monument in Birmingham, Ala., it is still free speech according to a ruling 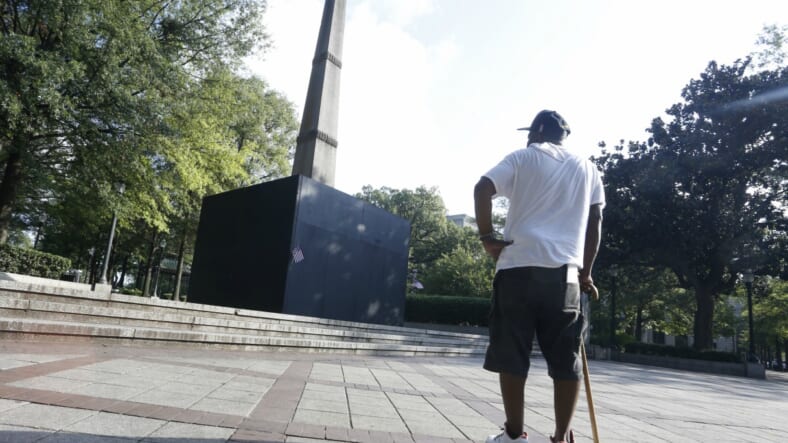 Brian Burrell pauses to look at a now covered confederate monument in Linn Park. on August 18, 2017 in Birmingham, Alabama. Alabamas attorney general Steve Marshall sued the city of Birmingham and the mayor for partially covering the Confederate monument with a wooden box, citing it violated the Alabama Memorial Preservation Act. (Photo by Hal Yeager/Getty Images)

An Alabama judge decided that the removal of Confederate monuments from public property constitutes as free speech and reversed a state law that prohibited taking them down.

On Monday, Jefferson County Circuit Judge Michael Graffeo weighed in and ruled that an Alabama state law from 2017 which stopped local governments from removing monuments or renaming public schools that were more than 40 years old infringed on the free speech rights of its citizens, the Associated Press reported.

Taking down Confederate statues has become a heated debate in communities around the country. The state sued the city of Birmingham for putting a 12-foot tall wooden box around a 52-foot-tall (15-meter) obelisk honoring Confederate soldiers and sailors.

The barrier around the monument at Linn Park was allowable, the judge ruled, and city officials are not required to take the barrier down.

Birmingham residents, Graffeo argued, are owed the free right to demand the removal of monuments they find offensive. The law protecting Confederate monuments and the $25,000 penalty charged for altering or removing a historical monument, he wrote in his 10-page opinion, is unconstitutional. The state can still appeal the ruling.

According to the AP, Birmingham has a population of 210,000 is more than 70 percent black.

In 2017, Alabama Gov. Kay Ivey signed the law despite protests from civil rights groups and Black lawmakers. She once said in an ad: “We can’t change or erase our history, but here in Alabama, we know something Washington doesn’t — to get where we’re going means understanding where we’ve been.”

Similarly, in Virginia, following the deadly Charlottesville rally in 2017, Democratic Virginia Gov. Terry McAuliffe last year reversed an earlier position and called for communities in the state to move monuments to museums.

Last year, Florida State University joined a growing list of communities and institutions that gave the boot to statues commemorating people who contributed to slavery or the abuse of black people.

An advisory panel of students, faculty and other interested parties voted that the statue of Francis Eppes VII is not the kind of monument they want standing at the entrance to their campus. The statue was removed in July night, The Tallahassee Democrat reported.

Eppes was a founder of FSU and former mayor of Tallahassee, where FSU is located, but also a slave owner and grandson of Thomas Jefferson.

There has also been a growing wave of support to remove Confederate statues in South and North Carolina.