ICYMI: Recap of #MUTERKELLY and others protesting SONY Music to drop R.Kelly 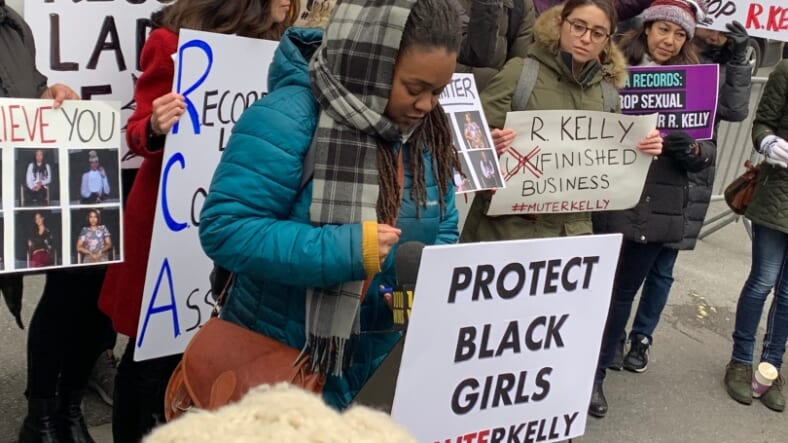 Thanks to the advocates who protested and used their voices, Sony Music has decided to drop R. Kelly.

After the premiere of Lifetime’s’ s six-part, three-day documentary, Surviving R.Kelly, many in the entertainment industry have been doubling down on the love and support they’ve previously shown the R&B singer. Artists who collaborated with the “musical genius” in the past are now speaking out and professing their support for his alleged victims and shown disgust regarding the allegations against him of sexual abuse.

Kelly and his attorneys continue to deny all of the allegations posed against him.

During the rally, Natalie Green (Spokesperson and Communications Manager, UltraViolet), communicated her frustrations with the music industry and what seems to be a need to put dollars before empathy for the women who say they survived being a part of his inner circle.

“It is really tiring to have RCA records and the entire music industry as a whole question the humanity of Black women and survivors,” said Green. “But this is worth fighting for and I believe this in my core. Black women, including the founders of the #MuteRKelly campaign, have been leading the way for years, calling for accountability and more importantly for justice for all of the women and girls who’ve been hurt by R.Kelly.

Green explains that Black women’s leadership has forced our celebrities, our families, our movements, and our communities to confront the ways famous Black men have perpetuated abuse against Black women and girls and how we can all do better in the future.

Check out more from Natalie Green, Sharaya Tindal Wiesendanger (Strategic Communications Coordinator of Black Women’s Blueprint), and the supporters who braved the cold winter chill to have their voices heard.