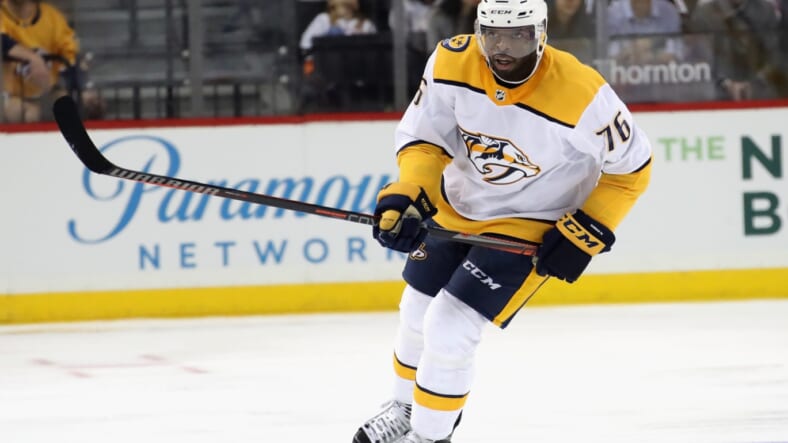 P.K. Subban #76 of the Nashville Predators skates against the New York Islanders at the Barclays Center on October 06, 2018 in the Brooklyn borough of New York City. The Predators defeated the Islanders 4-3. (Photo by Bruce Bennett/Getty Images)

Ty Cornett, a 13-year-old black youth hockey player who lives in suburban Detroit, has unfortunately fallen victim to racism. However, he has gotten support from one of the NHL’s biggest stars: P.K. Subban of the Nashville Predators.

Subban is a three-time All-Star and won the Norris Trophy, given to the league’s best defenseman, in 2013 – the first time a Black player has won the award. He is also the first black player to grace the cover an NHL video, as he is on the cover of EA Sports’ NHL 19.

Prior to Nashville’s game against the Detroit Red Wings last week, the father of one of Ty’s teammates told him about the racist taunts the young man had been getting. Subban, who was born in Toronto to West Indian parents, has been the victim of racist taunts and tweets throughout his 10-year NHL career.

That’s why when he took the time to record a video for Ty offering encouragement to push through the racist nonsense, it was coming from a genuine place.

“I can tell you this, right now, that as long as you’re still breathing in this world you’ve got to believe in yourself and let nobody tell you what you can and can’t do, especially it’s because of the color of your skin,” Subban says in the video, which was shot while he was warming up before the game.

“You know, in this world, some things happen that we don’t really understand. That’s OK. We don’t have to understand,” he said. “All we need to do is understand our self, believe in our self and keep trying and pushing forward.

“So, I just want to tell you that when you’re playing hockey, you play because you love the game and you want to play,” Subban continued. “Don’t let nobody take that away from you.”

The 42-second video has since gone viral and Ty’s father, Matthew told the Detroit News that his son couldn’t have been happier to hear from the NHL superstar.

“He went to his game that night and he gave me the biggest hug and he said, ‘Dad, I’m going to score a goal for you,’” Cornett said. “He’s like a new kid!”

Ty was subjected to the racist taunts during a tournament in Chelsea, Mich. against an unnamed team from Indiana. Players from the Indiana team followed Ty and, according to his father, said, “Hey, monkey, stick to basketball.” It’s a taunt similar to the one lobbed at Devante Smith-Pelly of the Washington Capitals last year in Chicago.

“And, every time he would line up in front of their bench, they would beat their chests [like an ape],” Cornett said. “And I watched them doing that and the coach would smile about it, smirk about it.”

Cornett said that during another tournament in Dearborn, Mich. earlier this season, players from a team in Pennsylvania, also called Ty a monkey.

“It’s unreal,” Cornett said. “It’s gotten out of hand, the past two years. When he was first called the N-word a few years ago at the age of 10 by a Canadian team, he had a breakdown on the ice and he went after a kid.

“In three years, it’s become so commonplace that it starting not to bother him,” he added, saying he has thought of pulling him out of youth hockey. “It’s starting to chip away at him.”

Subban also reached out to another young man from Maryland who was taunted with racial slurs at another tournament in western Pennsylvania.

The Michigan Amateur Hockey Association and its parent organization, USA Hockey, said they were not aware of Cornett’s complaints or what his father says he has experienced. Both have said they will investigate the incidents.

“And, I’ve always said that to him, like, I’ll never walk in your shoes,” Cornett, who is white and adopted Ty as a baby, added. “I’ll never know how bad it’s going to hurt.”