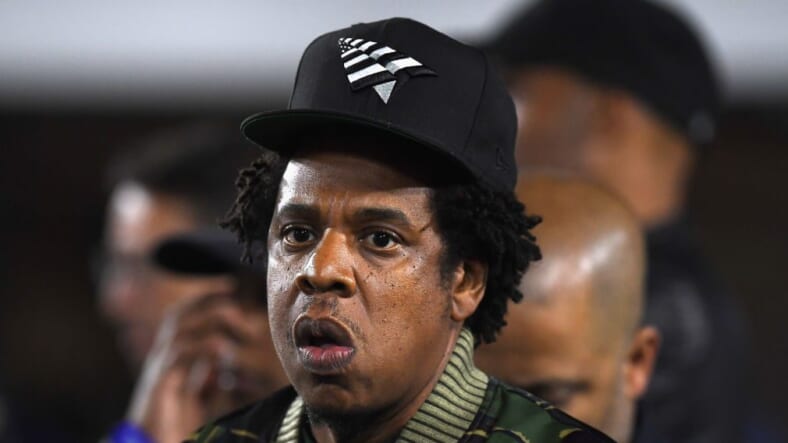 A Brooklyn gangbanger accused of botching up a hit job by shooting and killing two innocent bystanders, is now using the words of Jay-Z as an explanation for his actions.

According to the NY Post, Nicholas “Face” Washington  and his legal team chose an unconventional defense tactic during his first appearance in court on Wednesday. Washington is accused of attempting to kill two rival drug dealers, but instead shooting and killing Steven Negron and Andrelle Napper.

During opening statements, his lawyer, Marc Demarco, brought up lyric’s from fellow Brooklyn native Jay-Z’s “Where I’m From” to illustrate to jurors how much gun violence those living in the Marcy Project Houses have to endure.

“Can’t put your vest away and say you’ll wear it tomorrow/Cause the day after we’ll be saying damn I was just with him yesterday,” the lawyer dryly “rapped” to jurors. He then explained that his client is not a murderer, but instead just a “low-level” crack dealer, who carries a gun for protection just like the people Jay-Z rapped about in his songs. The Grammy winning rapper also grew up there.

The tracks “detail the violence that goes on where Jay-Z was born and raised,” Demarco told the courtroom.

While some in attendance may have been amused or even taken aback the defense, Andrelle Napper, the mother of the second victim, said invoking Hov’s name during such a serious matter was “just a distraction.”

“It’s like he was trying to normalize [murder],” said Oresa Napper-Williams, the mother of victim Andrelle Napper. “That’s a lack of sensitivity.”

Napper-Williams also believes it’s unfair to act as if selling drugs and having guns was something that everyone at the Marcy Houses accepted and condoned.

“I was a hard-working single mom. That wasn’t tolerated,” said the mother, who now runs a violence support group called Not Another Child.

“I can’t live in New York,” Napper-Williams continued, admitting that she chose to relocate to South Jersey after her son was murdered. “All I hear now are deer.”