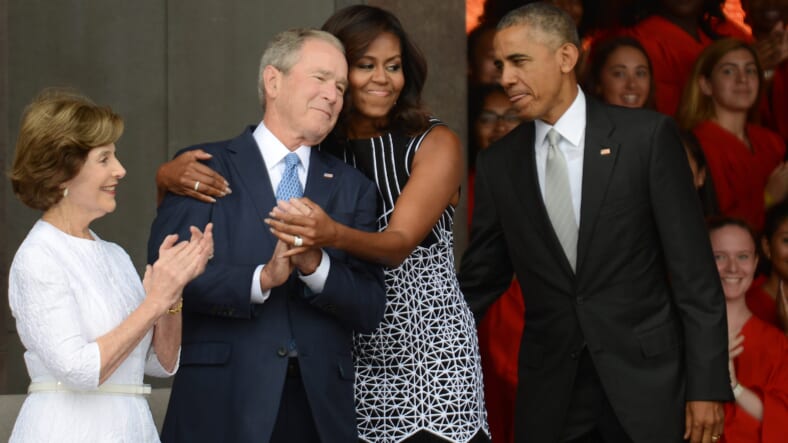 An Ohio sheriff who has been known for being a vocal President Trump supporter is now switching lanes by asking former presidents Barack Obama and George W. Bush to help the nation come to peace amidst the government shutdown and controversy over immigration.

According to The Washington Post, Butler county sheriff Richard K. Jones wrote a letter to Obama and Bush asking for the two of them to consider traveling around the country to help unify American citizens amidst the turmoil the country is facing, both socially and politically. The letter (which specifically touched on the divide between the Democrats and Republican parties)was posted online Tuesday.

“The country needs the two of you to show the American people that our political parties can get along even if opinions differ,” Jones said. “We are a great nation with a history of great leaders. The people need to hear from you. America needs your help.”

Many believe that the letter is quite odd, particularly since Jones and his fellow Trump supporters have contributed to the current polarization of the country.

How has Jones added to the divide?

According to The Washington Post, Jones has drawn attention to undocumented immigrants by using billboards in his county that points them toward his Ohio jail. The New York Times, even reported in 2006, that he personally provoked tension in the Hispanic communities in his county. Hispanic business owners revealed that his agitation made customers stay home, which caused the sales to drop in their companies.

Jones also made a video mocking all the the letters he received from people who encouraged him not to vote for Trump in the electoral college. His county actually voted for Trump over Hillary during the 2016 election.

Although Jones is well aware of his history, he has no interest in taking back his actions or his controversial views. Still what has changed, is his belief in Trump as a strong leader.  Having anyone other than Trump step up to the plate (at least in his mind), will ease tensions and promote civic dialogue. And that’s where he believes Bush and Obama come in.

“I’m a supporter of the current president. But this is a bigger picture,” Jones said, according to The Washington Post. “We need infrastructure, bridges, roads. Wars all over the world, and our military is about spent. We need to negotiate and fix health care. We need security on the border.”