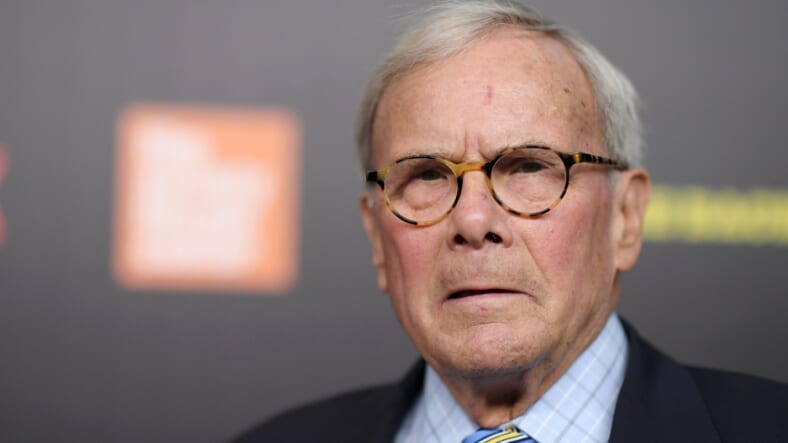 Tom Brokaw has issued an apology after comments he made about the Hispanic community sparked backlash.

According to CNN, Sunday, the NBC Nightly News anchor posted a statement on his Twitter saying he was distraught that his statements on Meet the Press that Hispanics should “work harder at assimilation” and make sure their kids learn English, had offended viewers.

“I feel terrible a part of my comments on Hispanics offended some members of that proud culture,” he began in the first of a series of tweets.

He added: “From my days reporting on Cesar Chavez to documenting the many contributions of Hispanics in all parts of our culture. I’ve worked hard to knock down false stereotypes. In my final comment in Meet [the Press] I said ALL sides have to work harder, at finding common ground – which I strongly believe – dialogue not division.”

Brokaw may be apologizing now, but during Sunday’s broadcast of Meet the Press, he actually admitted that his view on assimilation is one he’s had “for a long time.”

“You know, they ought not to be just codified in their communities but make sure that all their kids are learning to speak English, and that they feel comfortable in the communities,” the 78-year-old opined during Sunday’s segment. “And that’s going to take outreach on both sides [Republican and Democrat], frankly.”

During that same segment, PBS Newshour correspondent Yamiche Alcindor challenged the sentiments.
“We also need to adjust what we think of as America,” she said. “You’re talking about assimilation. I grew up in Miami, where people speak Spanish, but their kids speak English. And the idea that we think Americans can only speak English, as if Spanish and other languages wasn’t always part of America, is, in some ways, troubling.”
After the public spoke up with their displeasure during the airing, Brokaw took to social media that same night to thank Alcindor for pushing back, stating that she’s a “wonderful colleague and an important voice.”