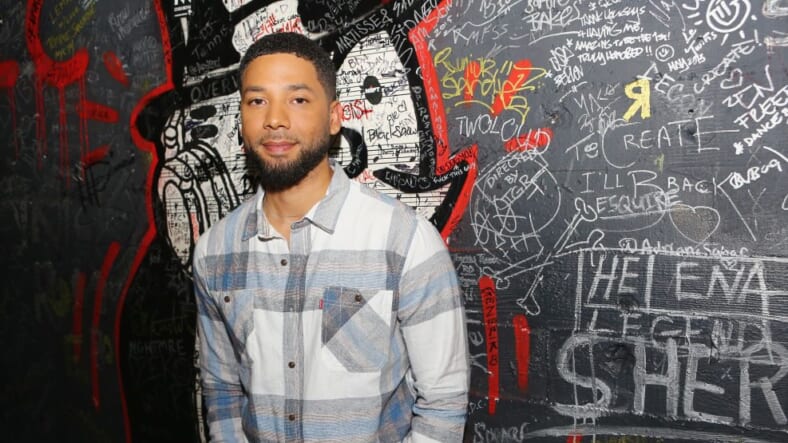 News broke this morning that Empire star Jussie Smollett had been hospitalized following a racist homophobic attack by two white men wearing MAGA hats. According to TMZ’s initial report, the two men said to the actor, “Aren’t you that fa**ot Empire ni**er?” before violently beating him, fracturing his rib, pouring bleach on him, tying a noose around his neck and yelling “This is MAGA country.”

It is important that we discuss this matter detailing that this attack was not just homophobic, but also racist. Media has already begun running the hate crime angle as homophobia, although it is very clear this is tied to more of the same racist MAGA actions we have seem become emboldened as of late. Because Jussie was attacked in Chicago, media will attempt to paint this as a simple “homophobic” attack, knowing most won’t read past the headlines and assume the abusers were Black. It is important that we do our due diligence in discussing the totality of how dangerous it is when a person lives in multiple marginalized communities.

It is very clear that MAGA is nothing more than a hate group protected because of how tied in it is with the President—who has also been proven on many occasions to participate in racism and homophobia. The slogan in of itself is a racist ideology. At what point has America prior to now been “Great” for marginalized groups? What era are they looking to go back to when America was so great? Questions that have never been asked, but actions that continue to let us know that the only agenda is white supremacy.

Nothing Funny about a Homophobic “Joke”

The attack on Jussie Smollett hurts personally. Being someone who identifies as Black and Queer in the media who knows mutual friends and mentors of him hurts. Knowing that  the threats I’ve received for my sexuality and my race can so easily turn into actions makes me angry. Knowing that every day I must walk the world as a Black Queer person with a target on my back is sometimes so heavy that some of us never leave the house. Some of us never get out of the bed. Watching our own be attacked, while failing to get the support of “allies” is a reminder that as Black Queer people, only we can protect ourselves.

This is why we get so angry every time someone makes a homophobic joke. There is no such thing as a homophobic joke. Homophobic jokes become thoughts in people’s heads. Thoughts become actions. Those actions become violence and we end up where we are today, where one of the most visible Black Queer people in the world could have lost his life just that easily. It’s why we go so hard at the Kevin Harts of the world to understand that this isn’t a joke, it is our lives on the line. It is why we critique Ellen so hard because the time for you to speak up against your white community and MAGA is now. Where are you during these times when there is no money on the line?

It is also important that we discuss how visibility is not the answer to correcting homophobia, transphobia or racism, and in fact often makes us more of a target. Symbolism is a dangerous slope that many in this country have tied to real progress. However, visibility of more identities at the top doesn’t necessarily trickle down into community. As we see with Smollett, his visibility has provided him no protection from the heinous acts of violence that many who are like him at a different class level face on a daily basis.

The Hazardous Intersection of Race and Sexuality

Over the last few weeks we have seen how the intersection of race and sexuality continues to harm Black LGBTQ folks. Over the last 18 months two Black gay men have been found dead in the home of wealthy white Democratic donor Ed Buck, who has not been charged with a crime. We have already recorded the first transgender murder of the year as well; which media continues to fail at reporting. The violence faced by Black Queer people places us in an environment where community opinion is almost as if we are bringing this violence to ourselves. As if this is some sort of punishment for living our lives outside of the heteronormative.

Days like today are hard, and unfortunately for us despite our rage and sadness as Black Queer people we will still need to find a way to make it through our days. Visibility won’t save us. Silence in our death is complicity in the violence we face. We can only hope for a day that our Blackness isn’t reduced by our Queerness, and that neither are a threat to our existence. Today is further proof that America is not great, never has been great, and may never be great in our lifetime.