It’s official- Soulja Boy is having the best year ever 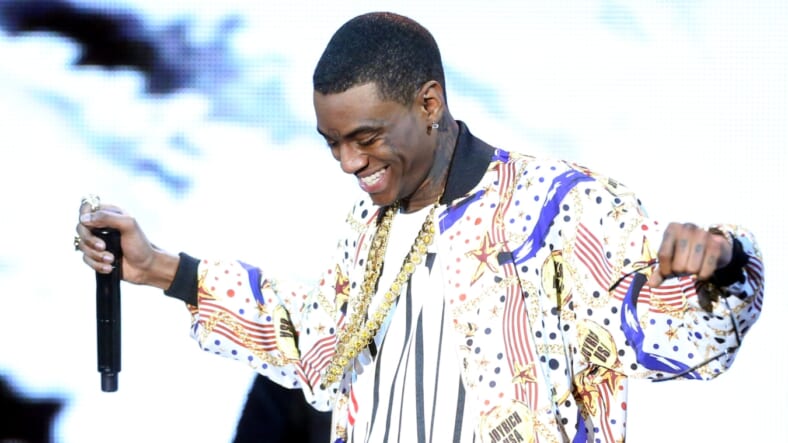 Soulja Boy recently announced that he has signed a deal with the Warner/ Chappell music label. (Photo by Frederick M. Brown/Getty Images)

It’s been a good week for rapper Soulja Boy, who posted photos to Instagram as he announced that he’s signed with Warner/Chappell Music.

In a photo showing four waiting bottles of champagne next to him, Soulja Boy, 28, is shown signing papers as others look on.

“It’s official I’m now signed to Warner/Chapell I’m the hottest rapper in the game facts!” Soulja, whose given name is DeAndre Cortez Way, posted with emojis of fire and praying hands.

Warner/Chappell underscored the announcement with a Thursday night Facebook post that included three photos from the signing with the caption, “Welcome to the fam Soulja Boy!”

The announcement unofficially marked Soulja’s return to public favor after a few missteps in which he called out “lame ass rappers” who produce “trash-ass —king music.” In perhaps the most controversial of the call outs, Soulja called Kanye West “lame” for his rants about Drake and his support of President Trump.

“You crying on Twitter every week about Drake?” Soulja said on The Breakfast Club syndicated radio program out of New York.  “You gotta stop that s—t, bruh. You look lame, bruh … You up here supporting Trump and s—t, bruh … That s—t’s not right.”

Soulja Boy also claimed in the nearly hour-long interview that he was a major influence for the opening lines of Drake’s 2010 single, “Miss Me.”

Last month, Soulja Boy denied rumors that he is using drugs because, some followers have said, his face looks different.

In a video that he posted live to social media, he said he’s never used crack or cocaine.

“First of all, I want to say, for everybody that’s saying, ‘Oh Soulja Boy look like he on drugs. Soulja Boy look bad, like he on crack – he on powder,’ B—ch, don’t play with me like that. I ain’t never did crack in my life, b—ch. I’m a millionaire. I’m worth mother—king $30 million, n—a. I never did cocaine in my life – don’t play with me like that.’ “

Soulja Boy blamed his appearance on a Jan. 6 car accident.