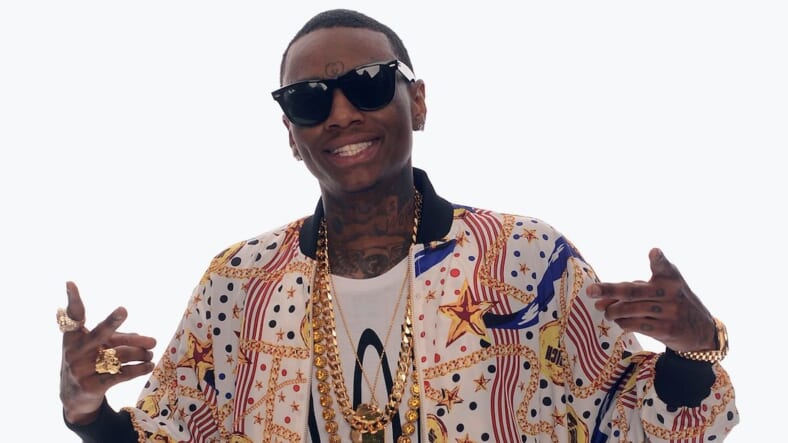 Soulja Boy is defending himself against folks who suspect he uses hard drugs. Some followers have speculated that the rapper and Marriage Bootcamp star is abusing narcotics due to his noticeably different-looking face. He slammed his haters in a live video and explained that his new look is the result of injuries he sustained during a recent car accident and denied ever using crack.

“First of all, I want to say, for everybody that’s saying, ‘Oh Soulja Boy look like he on drugs. Soulja Boy look bad, like he on crack – he on powder.’ B*TCH! Don’t play with me like that! I ain’t never did crack in my life, B*TCH! I’m a millionaire! I’m worth motherfu*king $30 million, nigga! I never did cocaine in my life ­– don’t play with me like that!,” he says in the clip.

“I was just in a bad car accident two days ago, b*tch. I almost lost my life. I hit my fu*king face on the fu*kin dashboard of the car, and my sh*t swole – and my teeth – I need surgery and sh*t, ni**a. Don’t be making fun of my appearance and my fu*kin’ looks, nigga. Talkin’ bout I look like I’m on drugs. Y’all better suck my fu*kin’ d*ck!”

Soulja Boy addresses everyone saying he looks like he’s on crack: pic.twitter.com/OltrlRefL8

Soulja Boy was involved in a car accident on January 6 as a result of mudslides in California. After the crash, the 28-year-old who stars in the current season of Marriage Bootcamp shared details of his harrowing experience on social media.

“Was involved in a very bad car accident last night due to a flash flood and mud slide,” he wrote early Sunday in a since-deleted tweet. “My car got stuck too almost went into the ocean.”

“Just thankful to be alive. My face all swollen and sh*t.”

Soulja Boy stars in the current season of Marriage Bootcamp on WeTV.