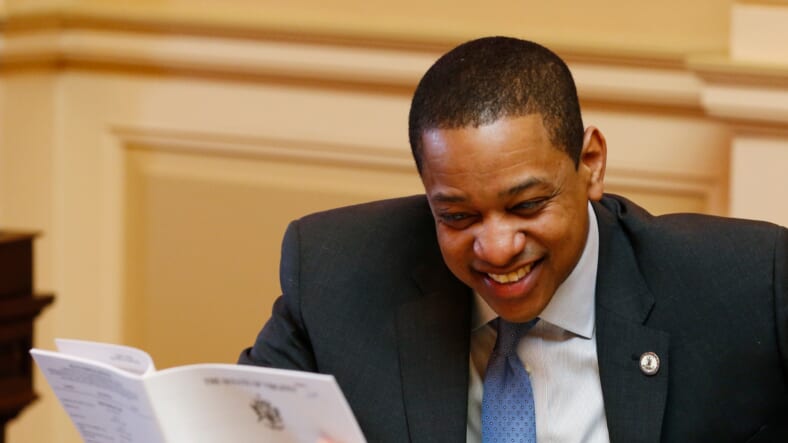 Virginia Lt. Gov. Justin Fairfax is being accused of sexual assault by Vanessa Tyson, who has made the details her story public. (AP Photo/Steve Helber).

Dr. Vanessa Tyson, a tenured professor at Scripps College, has issued a statement via her attorneys detailing an alleged sexual assault she says Justin Fairfax (now Lt. Gov of Virginia) committed against her in 2004.

Fairfax is currently in the news because he is next in line to ascend to the governor’s seat if currently (but we’ll see for how much longer) VA Gov. Ralph Northam is forced to resign in the midst of his blackface scandal.

In her letter, Tyson explains that she met Fairfax in Boston during the 2004 Democratic Convention. According to her, the two engaged in consensual kissing in his hotel room, but that the kissing quickly escalated to him forcibly grabbing her by the back of the neck and pushing her mouth onto his exposed penis. She says she cried and gagged as he forced her to perform oral sex on him.

“After the assault, I suffered from both deep humiliation and shame. I did not speak about it for years, and I (like most survivors) suppressed those memories and emotions as a necessary means to continue my studies, and pursue my goal of building a successful career as an academic,” Tyson wrote in her statement.

She says an article she read in 2017 about Fairfax’ campaign for Lt. Governor triggered her buried memories the Boston incident and prompted her to tell close friends about the experience.

As part of his defense, Fairfax acknowledges a sexual encounter with Tyson at the convention, but maintains that it was consensual.

Statement of Dr. Vanessa Tyson, who has accused Lt. Gov. Justin Fairfax of sexual assault in 2004:

“What began as consensual kissing quickly turned into a sexual assault.” pic.twitter.com/UI9Gz11DWj

Statement of Dr. Vanessa Tyson by on Scribd