Jay Scott Smith
Virginia Gov. Ralph Northam prepares to address a press conference at the Capitol in Richmond, Va., Thursday, Jan. 31, 2019. Northam made a statement and answered questions about the late term abortion bill that was killed in committee. (AP Photo/Steve Helber)

Virginia Gov. Ralph Northam apologized on Friday after a 1984 yearbook photo surfaced showing he is one of two people in a racist yearbook photo.

“Earlier today, a website published a photograph of me from my 1984 medical school yearbook in a costume that is clearly racist and offensive,” Northam said in statement. “I am deeply sorry for the decision I made to appear as I did in this photo and for the hurt that decision caused then and now.”

This pictures first surfaced in the Virginian-Pilot on Friday and they show Northam, a Democrat, in his 1984 Eastern Virginia Medical School yearbook of a person in blackface and another wearing a Ku Klux Klan hood. It is unclear which of the men pictured is Northam, then 25, who is in the middle of his first term as governor.

Other pictures include a headshot of him in a jacket and tie, a photo of him in a cowboy hat and boots, and a third of him leaning against a convertible.

Jack Wilson, the head of the Virginia Republican Party, called on Northam to resign. In 2018, that party’s nominee for the U.S. Senate, Corey Stewart, lost to Democrat Tim Kaine following a campaign where he bragged on Reddit about his love for the Confederacy.

“Racism has no place in Virginia,” Wilson said in a statement on Friday. “These pictures are wholly inappropriate. If Governor Northam appeared in blackface or dressed in a KKK robe, he should resign immediately.”

Northam has not answered any of those calls for his resignation, but apologized profusely for the 35-year-old photo. Peep his latest video on Twitter.

My fellow Virginians, earlier today I released a statement apologizing for behavior in my past that falls far short of the standard you set for me when you elected me to be your governor. I believe you deserve to hear directly from me. pic.twitter.com/1rSw1oxfrX

“This behavior is not in keeping with who I am today and the values I have fought for throughout my career in the military, in medicine and in public service,” he said in the statement. But I want to be clear, I understand how this decision shakes Virginians’ faith in that commitment.

“I recognize that it will take time and serious effort to heal the damage this conduct has caused,” he added. “I am ready to do that important work. The first step is to offer my sincerest apology and to state my absolute commitment to living up to the expectations Virginians set for me when they elected me to be their governor.” 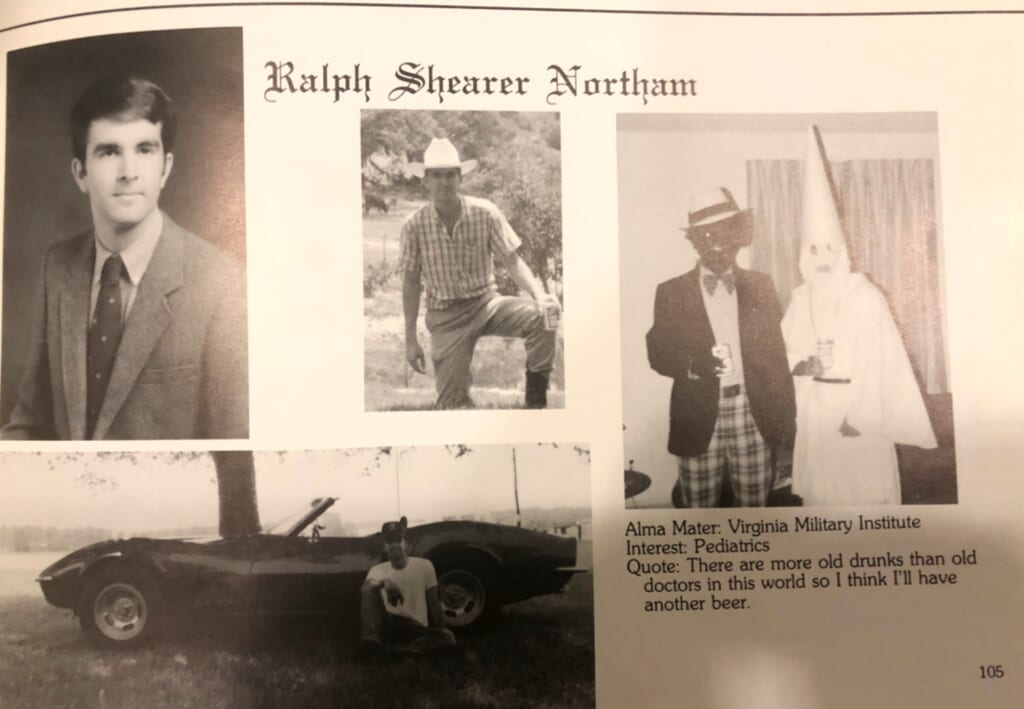 This image shows Virginia Gov. Ralph Northam’s page in his 1984 Eastern Virginia Medical School yearbook. The page shows a picture, at right, of a person in blackface and another wearing a Ku Klux Klan hood next to different pictures of the governor. It’s unclear who the people in the picture are, but the rest of the page is filled with pictures of Northam and lists his undergraduate alma mater and other information about him. (Eastern Virginia Medical School via AP)