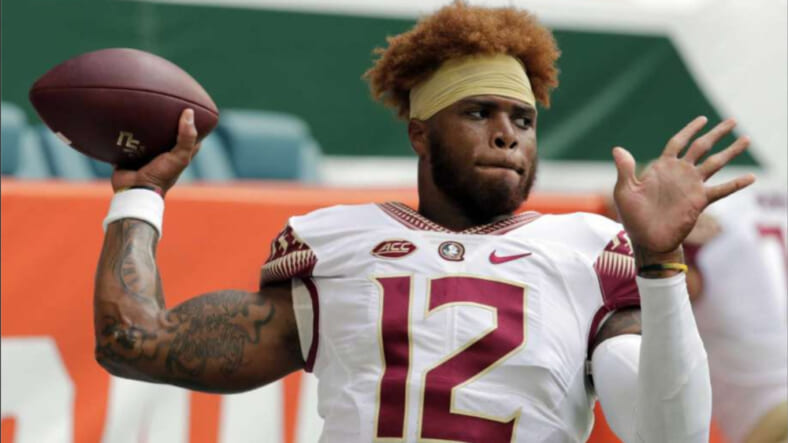 A Florida State quarterback has been dropped from the team after his ex-girlfriend posted a troubling video of an abusive assault.

Deondre Francois was reportedly caught on camera repeatedly hitting his girlfriend as she pleaded for him to stop. The camera is aimed at the ceiling as voices can be overhead and Francois reportedly makes threats against the woman.

“Stop hitting me in my f***ing face” the woman pleads.

The woman, who has reportedly been identified as Diamond Lindsey by the Daily Mail, detailed the encounter in the caption of the video:

“I normally don’t put my business on ig, but I am tired of my name being drug through the mud since the beginning, I have been silent. For 2 years I have been in a domestic situation with Francois,” the woman wrote in a now-deleted post.

“I thought I loved him and thought he could change for the better but it has gotten worse. I lost my first child because of all of the beating and I suffer from post Partum depression. The situation is taking a toll on my life. Yes, I stayed after that because I was stupid and blinded by love. This isn’t love. You are a coward and this isn’t right. Just because you are who you are that doesn’t give you the right to put your hands on a woman ever!!!”

Francois has been previously accused of domestic violence.

In 2018, Francois reportedly abused his then-pregnant girlfriend by throwing her to the ground and cutting her arm.

“Last night, I informed Deondre Francois that he is no longer a member of the Florida State football program,” coach Willie Taggart said in a statement.

“As we build a new culture and foundation for FSU Football, we have high expectations for all of our student-athletes and we will not shy away from those high standards of conduct. We are moving forward as a program.”