Historians are working to learn more about the first Africans to live in Jamestown, America's first successful permanent settlement, to see what their imprint would be on the nation 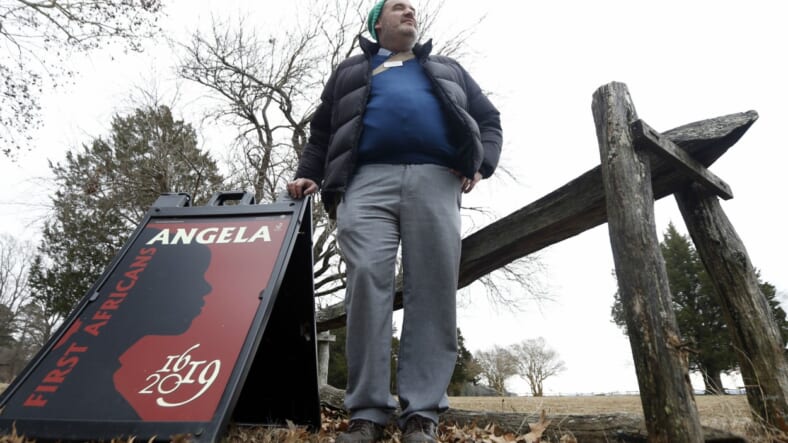 Mark Summers, a historian at Historic Jamestowne poses for a photo in Jamestown, Va. Summers leads tourists down paths once used by Angelo, also known as Angela, who was one of the first Africans to arrive in North America. Although there’s not much known about Angela, Summers said being able to show people where she lived and the grounds she walked is a spiritual experience for some. (AP Photo/Steve Helber)

WASHINGTON (AP) — The first Africans to arrive in North America were so little noted by history that many are known today by only their first names: Antony and Isabella, Angelo, Frances and Peter.

Almost 400 years ago, they were kidnapped and forcibly sailed across the ocean aboard three slave ships — the San Juan Bautista, the White Lion and the Treasurer — and then sold into bondage in Virginia.

READ MORE: A Day Late and Several Dollars Short: Charleston apologizes for its role in the slave trade

Now their descendants, along with historians and genealogists, are seeking recognition for a group of 20-some Africans they describe as critical to the survival of Jamestown, England’s first successful settlement in North America.

“We need to reclaim our history. We need to tell our story,” said Calvin Pearson, head of Project 1619, which is named after the year those first Africans landed near what became Hampton, Virginia.

A few historical markers and records mention these early slaves, but there’s been scant research on their lives. Pearson and others are working to learn more.

Before the slaves arrived, Jamestown was starving. “Basically all of those people were right off of the streets in England,” said Kathryn Knight, who in May will release a book titled “Unveiled – The Twenty & Odd: Documenting the First Africans in England’s America 1619-1625 and Beyond.”

The slaves’ arrival marked the beginning of the region’s fractured relationship with blacks. More than two centuries later, Virginia became home to the Confederate capital, and in the last week its governor has been pressured to resign for appearing in a racist photo in a 1984 yearbook.

The new arrivals were Catholic and many spoke multiple languages, according to Ric Murphy, an author and descendant of John Gowan, one of the Angolan captives.

They came from a royal city and “were quite informed and educated, and several of them, based upon what they did in the latter part of their years, clearly were leaders in the community in one form or the other,” Murphy said. “Many of them became landowners, which is quite different from the false narrative of what an enslaved person was.”

In Jamestown, historian Mark Summers leads tourists down paths that Angelo — also known as Angela — walked after being sold to a Captain William Pierce.

Like many of that first group, her life is largely a mystery. In fact, her entire known biography “could probably fit on a 3×5 index card,” Summers said. But being able to show people where she lived and walked is a spiritual experience for some, he said.

For African-Americans, “this is the same thing as going to Plymouth Rock,” said Summers, who works at the Historic Jamestowne park. “Here’s a place where you can stand and say, ‘We set foot here, and we can still walk this ground.'”

The first Africans were among more than 300 taken out of the Ndongo region of Angola, a Portuguese colony of mostly Catholic Africans, on the San Juan Bautista bound for Mexico. That ship was attacked and plundered by the White Lion and the Treasurer, which together seized about 60 slaves. After stopping in the Caribbean and trading some of the slaves for provisions, the White Lion sailed for Virginia with its human cargo.

Englishman John Rolfe, who would later marry Pocahontas, documented the White Lion’s arrival at what was then called Point Comfort.

“He brought not anything but 20, and odd Negars, which the Governor and Cape Merchant bought for victualle,” Rolfe wrote in a letter in January 1620, meaning that the colony purchased the slaves with provisions.

A 1620 census showed 17 African women and 15 African men in Jamestown.

Although sold into servitude, many of those original Angolans fared better than the millions of African slaves who came to North America later, said John Thorton, a Boston University professor of African American studies and history.

“They had a better chance at a better future than almost anybody who followed them because they were the first,” Thorton said. “A lot of them ended up owning property, and they ended up owning slaves of their own.”

By intermingling with the English colonists, some had children who ended up passing for white and merging into early colonial society, Thorton said.

Some, like the Catholic John Pedro, met with tragedy, Pearson said.

Pedro “ended up owning quite a bit of land in Virginia. When the English Civil War broke out, it was Protestants versus Catholics,” Pearson said. Pedro moved to Maryland to live with other Catholics, but he was captured in a battle and executed.

Antony and Isabella became servants for a Captain William Tucker, gained their freedom around 1635 and started a homestead in Kent County, Virginia, Pearson said. Around 1623, they had a son named William Tucker who “became the first documented African child born in English-occupied North America.”

Descendants of Antony and Isabella are buried at a Hampton cemetery that has been in use since the 1600s, Pearson said.

Knight has a different interpretation of those early records, concluding that Frances gave birth to Peter first, making him the first African child born in Virginia.

Described in later records as a “Negro carpenter,” Peter married and received his freedom with the promise of paying 10,000 pounds of tobacco to his master around 1676. He made the last payment in 1682, Knight said.

Murphy, who wrote “Freedom Road: An American Family Saga from Jamestown to World War,” said it’s important for black people to know about these first Africans because it “helps us have more ownership of American history.”

Pearson, whose organization plans to honor the anniversary of the Africans’ arrival on Aug. 24, agrees.

“From here, we see the beginnings of the Africa imprint on what would become the United States of America. It’s worth remembering.”