With business deals off the court, James is raking in more bucks than any of his other basketball buddies 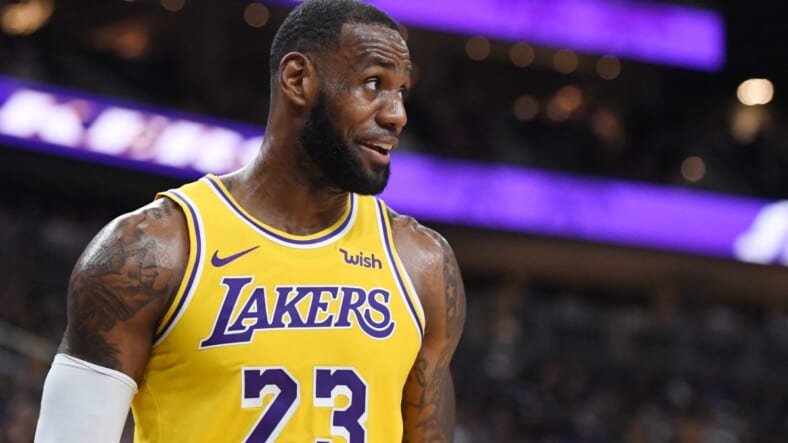 LeBron James #23 of the Los Angeles Lakers walks on the court during a stop in play in a preseason game against the Golden State Warriors at T-Mobile Arena on October 10, 2018 in Las Vegas, Nevada. (Photo by Ethan Miller/Getty Images)

Basketball player, Lebron James is making boss moves on and off the court.

CBS Sports reports that the Laker’s basketball player ranked No.1 for the fifth time as the NBA’s top-paid player, receiving close to $89 million between his basketball endeavors and off-court projects.

The three-time NBA champ is one of the very select players in the league who is making more money outside of basketball.

According to Forbes, he has also received $53 million off the court in endorsements with partners such as Nike, Coca-Cola, Beats By Dre, Blaze Pizza and 2K Sports. He’s received an additional $35.7 million in salary and bonuses.

Steph Curry and Kevin Durant hold the No. 2 and No. 3 spot. James, Curry and Durant are the only players who make more money from other ventures than their salary. Shoe deals are the main contributors to their income amount.

Russell Westbrook, James Harden, Chris Paul, Giannis Antetokounmpo, Damian Lillard, Blake Griffin and Paul George, round out the top 10 ranking, respectively. In total, the players made an estimated $540 million this year from their outside projects, which is 180 million more than NBA’s highest-paid player five years ago.

“King James” has been building his empire for years with three different companies. He took charge of his own marketing back in 2006 with is his marketing and branding company now known as LRMR Ventures.

This third business, Uninterrupted, a digital media company was created in 2015 and received a $15.8 million investment within the same year.

We can’t forget to acknowledge that James is using his money to give back in a meaningful way. The NBA star opened up his “I Promise” school in his hometown city of Akron, Ohio for at-risk students last year.

Major props to the NBA legend for making big moves!