DeVon Franklin on ‘The Truth About Men’ and how he’s spending Valentine’s Day with wife, Meagan Good

Franklin reveals how to master the dog in every man. 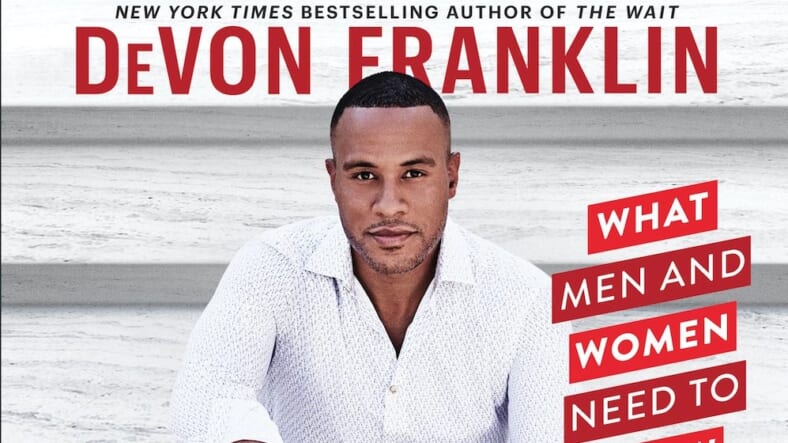 The Truth About Men

DeVon Franklin is known for his work as a producer, a minister, motivational speaker, and best-selling author.

In his latest book, The Truth About Men, he highlights the reasons so many men are plagued by their inner “dog” and offers advice about ways men and women can “master” that dog and train him to reach his full potential.

Franklin asserts that most men are driven by lust, greed, and a desire for power, often leading to bad behavior and failed relationships. While the premise may seem a bit terrifying, the book provides an authentic perspective on what can be done to cultivate loving, fulfilling relationships and TheGrio caught up with him just in time for Valentine’s Day, when so many folks are feeling down about their love lives.

“It’s crazy that this day can artificially produce those kind of negative feelings, but I’m sensitive to it. Today I’ve been trying to get on social media and encourage anybody who feels that way can feel better about where they are today,” he says.

“Let’s be very clear. Every man “has” a dog, not “is” a dog. We are what we do. That’s the struggle. Every man has this dog in them but the antidote is mastering love,” he explains. “Every man has a dog inside of them but every man also has a better man inside of them. Every man has the master in them. If there’s good in that man, what is the plan to tap into that? There’s something that can be done about it.”

While the book offers advice about “mastering the dog” to both sexes, don’t assume Franklin is putting the “training” duties on women.

“This is not a book about how women need to do better or how women need to be more supportive of men. This is a book about what men can do better and offers women information along the way. It’s really about us being accountable and being responsible for our own behavior and making sure that women are no longer in the dark about us. Most women don’t understand men and vice versa.”

Although Franklin highlights plenty of bad behaviors men are guilty of, and champions the #MeToo and #TimesUp movements, he also encourages women to be open about their man’s potential.

“I think it’s OK for women to own the pain that they have been through and experienced at the hands of men. It’s also important to know you can’t paint every man with a broad brush. There’s a way to temper the anger and also give a fair shot to those men who legitimately work to be better. It’s important in this sensitive moment not to generalize.”

According to DeVon Franklin, cheating doesn’t have to be a deal breaker in relationships.

“I do believe that you can recover from cheating. Ultimately, it comes down to each couple to decide whether or not they can survive cheating. Can they look through it? Is the cheater willing to do the work internally that can help identify what caused them to cheat to begin with? I am optimistic,” he says. “I don’t believe that once a cheater, you’re always a cheater. I think it’s really important for men to take accountability.”

DeVon Franklin also revealed how his wife, Meagan Good, feels about his latest project and how he plans to spend Valentine’s Day with her.

“Meagan has been incredibly supportive. She thinks the book is necessary. Today, for Valentine’s Day, we’re flying to Atlanta because I have the next leg of my book tour and she is with me. That means the world to me.”

The Truth About Men is on sale now.