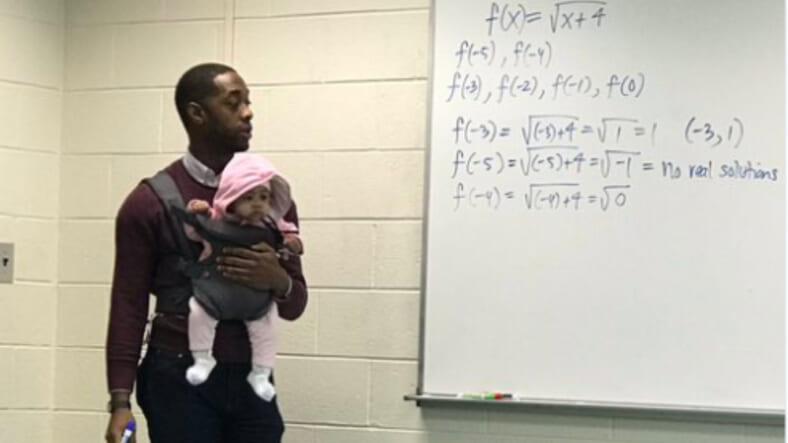 Historically Black Colleges and Universities are known for their nurturing nature when it comes to cultivating Black students.

And a Morehouse College professor is going viral for taking that philosophy the extra mile after a student couldn’t make childcare arrangements.

Or rising daycare costs could be the problem for a struggling college student. So what’s an aspiring scholar to do in those circumstances? Quit school or carry their kid to class?

Last Friday, professor Nathan Alexander babysat while giving a lecture with his student’s baby tethered to his chest, Yahoo reports.

Wayne Hayer came to his math class with his baby daughter in the Best baby carrier. And figuring that the tiny little visitor might get frowned upon, he explained to his professor that he couldn’t find a babysitter.

“No problem, in fact I will even hold her so you can take better notes in class,” Alexander reportedly said.

Nick Vaughn, another student saw the whole exchange go down and posted about it in a now viral Facebook post.

“Not saying that at a [predominantly white institution] you won’t find this act, but here on the campus of Morehouse one of the iconic [historically black colleges and universities] in the world, it just felt more caring and from the heart,” Vaughn wrote.

“We build community, we make sure that we support our students in whatever they need, and that’s part of my commitment,” he says, but adds, “What I want to make sure that I underline is that I’m not special. Teachers do this stuff every day in their own way.”

Alexander teaches mathematics education, statistical and mathematical modeling, and social networks and graphs at the prestigious school. He is the James King Jr. Visiting Professor of Mathematics Teaching at Morehouse.

“I try to tell my students early in the semester that if they ever need anything from me, to be in touch with me to let them know, and I really work to let them know that I mean that,” Alexander the professor told Yahoo Lifestyle.

Hayer talked to Alexander about his difficulties getting to class and said he often missed out on study sessions.

“I said feel free to bring her to my office,” Alexander says. “And Friday, he walks into the class and he says, ‘Hey, you said if I need anything to let you know. Here she is.’ ”

“She was really well behaved,” he says. “I think we all enjoyed having her energy.”