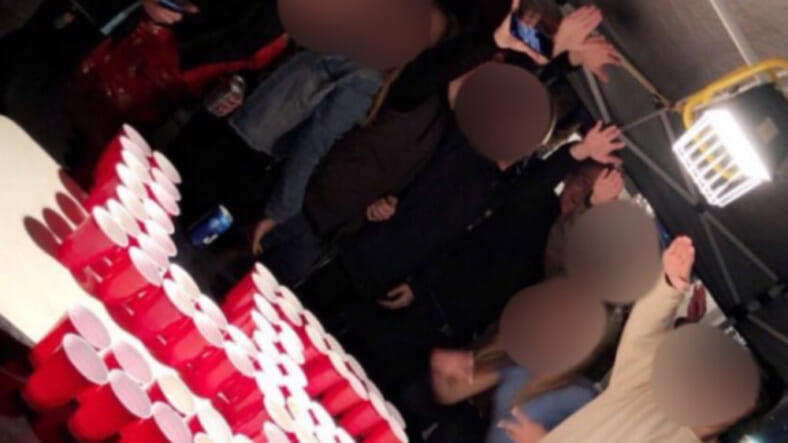 This image from Twitter shows Newport-Mesa students toasting over a swastika made from red plastic cups. The “ultimate rage” banner over the image was added by a social media user. (Twitter)

Students at a California school are being investigated after a weekend of partying turned up racist social media posts with students flashing the Nazi symbol while posing around a swastika symbol arranged with red plastic cups.

—Husband and stepdaughter nabbed for the murder of Jacquelyn Smith—

While the Newport-Mesa Unified School District is working to identify the students, they believe they could be current or recent grads from Newport Harbor High School, one official said. However there are several other schools in the district the students could hail from, The LA Times reports.

The Newport-Mesa Unified School District officials sent a letter to parents on Sunday about the disturbing discovery.

“We were recently made aware of social media postings involving some students who created inappropriate anti-Semitic symbols, and possible underage drinking,” the letter said. “While these actions did not occur on any school campus or school function, we condemn all acts of anti-Semitism and hate in all their forms.”

On Sunday, district officials met to discuss how to handle the incident and determine what disciplinary action would be appropriate. Law enforcement officials were also notified, she said.

“We remain focused on educating students on all aspects of life’s challenges and are committed to holding students accountable, educating them on the consequences of their choices, and the impact these actions have on our schools and community at large,” the district said.

“We are asking that parents please partner with us in helping students make good decisions, be respectful of others, and to always use good judgment.”

“This is an insult to the 6 million Jews who died in the Holocaust,” Cooper said. “It’s also an insult to the many thousands of families in Southern California whose loved ones in the Greatest Generation fought, bled and died to defeat the Nazis and defeat the swastika.”