After pleading for a relationship with his children on TV, R&B singer is locked up for not financially helping their mother raise them 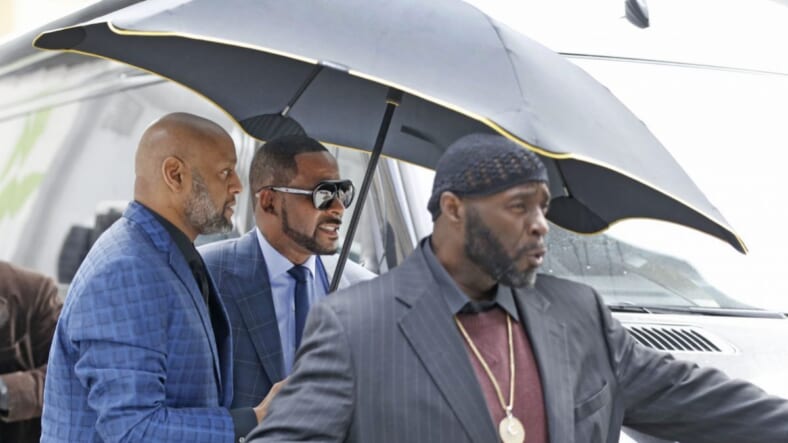 After making his tearful and outrageous plea for his innocence regarding his sexual abuse charges with Gayle King on CBS This Morning this week, R. Kelly has been arrested again. This time for unpaid child support. The irony of his arrest is that he inferred that these allegations are keeping him from being a good father to his children. Perhaps, there is another reason. Maybe, he should check in with his children’s mother to figure out the real reason the relationship is troubled.

According to TMZ, Kelly was arrested on Wednesday for failing to pay more than $160,000 in child support. Deputies escorted Kelly out of the courtroom after his arrest.

Before being detained, he arrived at court with his legal team to appear before the judge on Wednesday regarding his child support case.

TMZ reported earlier that sources close to the disgraced singer, Kelly have not provided his ex-wife, Drea Kelly, the $161,633 that he owes her.

He was required to pay her that amount out of the nearly $200,000 that he yet to give her

Kelly owes Kelly $194,045 in back child support, interest, education, and health care costs. That amount was broken down in court documents as $20,833 per month, as of January 2009.

TMZ reported earlier that the D.A. could charge him for failure to pay since owing any amount over $20,00 is a felony.

During his explosive interview with King, that was taped on Tuesday, the singer revealed to the CBS host about he wanted a relationship with is kids.

TMZ reports that they have reached out to his attorney, but have yet to hear back.

The story is developing.