The comedian shared that he's been on the new diet since January and insists that he now has "the cholesterol levels of an infant." 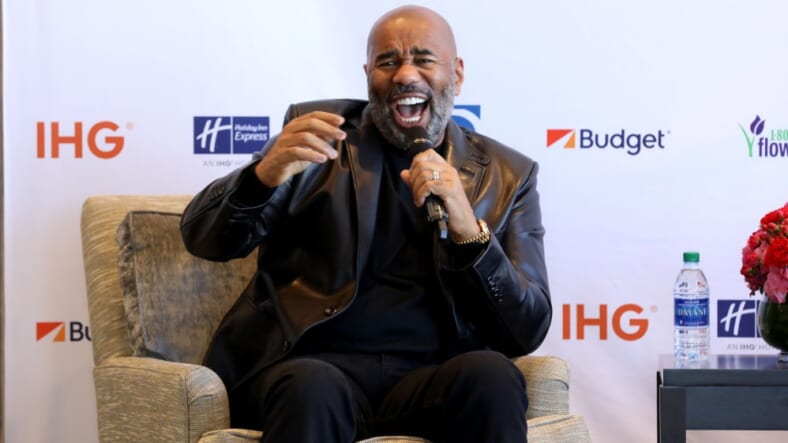 Comedian, radio and TV personality Steve Harvey is now a major believer in the power of the vegan diet created by Beyoncé.

On an episode of his show, Harvey spoke to Marco Borges, the creator of The Green Print plan, about the diet that he created with Beyonce and Jay-Z, which promotes the benefits of a plant-based diet over eating meat.

“First and foremost, a plant-based diet is full of fiber, which helps to lower bad cholesterol, helps lower blood pressure, helps to lower your risk factors for diabetes, heart disease, dementia, cancer,” said Borges, according to Plant Based News magazine. “It’s the only diet in the world that has been clinically proven to not just prevent, but also arrest and reverse, heart disease. No other diet in the world can say that.”

READ MORE: Gayle King opens up about R.Kelly interview, ”I never thought he was going to hurt me”

The key to changing to a plant-based lifestyle is to incorporate more veggies into your diet and to do it one meal at a time, according to Borges.

After trying it for himself, Harvey says that he is a believer.

“Let me tell you something. I’ve been doing this since January 4. I got to tell you, I do feel a lot better,” Harvey said. “I kid you not … I have the cholesterol levels of an infant. My cholesterol numbers are lower than my cardiologist’s cholesterol numbers. You can eat your way healthy. You are what you eat.”

READ MORE: Actress and activist Yara Shahidi celebrates Barbie’s 60th anniversary with a doll that looks just like her

“Every time we eat, we are either fueling disease or feeding health,” Borges told Harvey. “We are not at the mercy of our genes … Disease is not what’s hereditary. It’s the habits that are hereditary. Change your habits and you change your destiny.”

Borges is the author of the New York Times bestseller, 22 Days Nutrition, which fully details what the plant-based diet is about. Borges has since become Beyoncé and Jay-Z’s weight loss advisor, with the couple even dubbing him their “plant-based guru” in the forward to his book.