Check out the ultimate Super Shero for the little girl in your life.

In honor of Barbie‘s 60th anniversary today, Mattel released their “Shero” doll collection, starring none other than actress and activist, Yara Shahidi.

The 19-year-old Grown-ish star is one of three women of color who have the honor of having their likeness embody a Shero Barbie. Joining Shahidi in the honor are tennis champion Naomi Osaka and British model Adwoa Aboah.

“It is really surreal, partially because of the company that I’m in,” Shahidi revealed to theGrio exclusively at her hotel after the event when opening up about being one of nine honorees.

READ MORE: My Sister’s Keeper: 15 Trailblazers who champion the efforts of other women

“I mean, these are all people who I personally admire. I remember when the Ava [Duvernay] doll came out and how excited I was, and so to see the expansion of people who I’m genuinely friends with, people who I’ve admired from a distance and to think that I’m in that same group as them, it is just really exciting.” 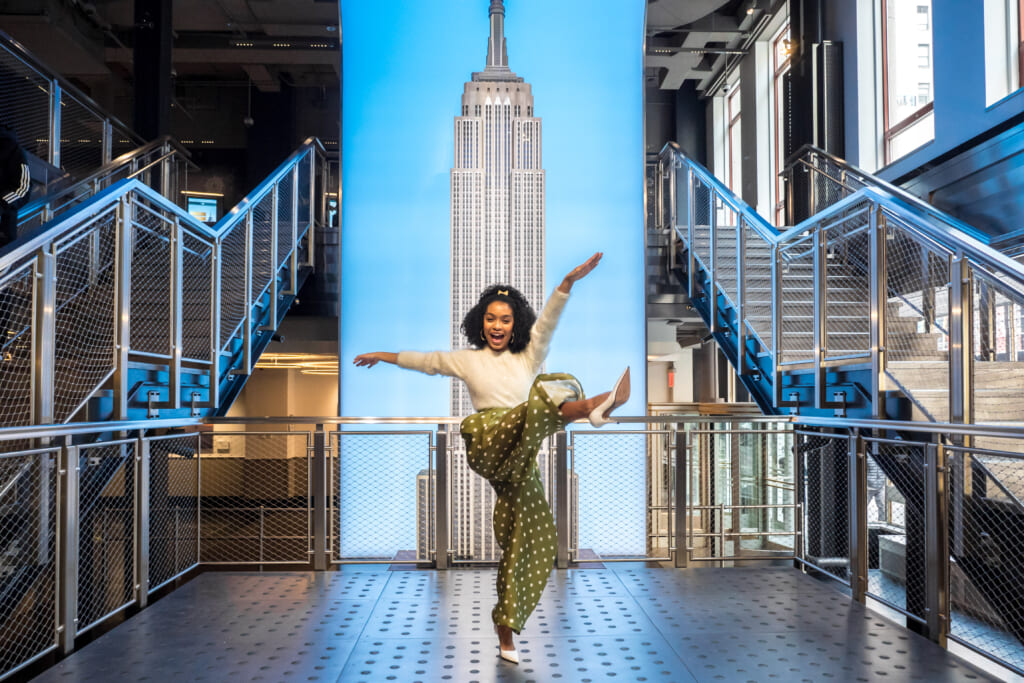 Another reason for Shahidi’s excitement behind the Mattel collaboration, is her own herstory with the Barbie brand. The actress confessed that when she was younger, she shot an ad for Barbie’s “So in Style” collection, released in 2009.

“It’s a very full circle moment,” Shahidi exclaimed. “Not in my wildest dreams did I think I’d have a Barbie that looks like me!”

Shahidi noted that she was extremely hands-on in the making of her doll, even being asked to weigh in on the tiniest details; from her wardrobe to her self-proclaimed “bushy eyebrows.”

“It’s such a fun process because as a creative person, they’ll send you the pieces of the Barbie, so you’re kind of assembling it yourself. It was everything from choosing my body type to choosing hair texture and style, to my outfit,” explained Shahidi.

“I was really excited to be able to have my ‘VOTE”‘ shirt on because it’s such a huge part of who I am, and usually what I’m wearing. It was a cool process not only creatively, but to also be working with a team that really felt it important to reflect who I am.”

More than just a doll

Aside from creating a Barbie who looked like herself for millions of young girls worldwide, Shahidi feels that representation doesn’t start, nor end, with just one brown doll. While the actress admits that she is happy to be a part of the trend where women of color are represented, she’s passionate to see how much further she can take things.

She’s doing that in more ways than one. Shahidi just signed a major deal to become the new face of Bobbi Brown cosmetics, ensuring that she leaves an indelible mark in both the toy and beauty worlds.

“I love that with both Bobbie and Barbie, it was genuinely a collaborative process of trying to figure out how do I best reflect myself,” said Shahidi. “The goal is to see somebody who represents you, but also, to realize [and] understand that I alone can not represent everybody. I will be extremely deficient in attempting to represent everybody.

While her work may appear fun (and by all accounts, it absolutely is), Shahidi is also about the fundamentals in everything she does and stands for, including her activism. At just 9-years old, the fashion maven established “Dharma Driven,” a corporation which gives her the platform to discuss issues that are important to her. It’s her way of leaving something more significant in the world. She’s very clear that it’s the purpose, and not the popularity, that makes everything worth doing.

“In this industry, it is very easy to become self-centric, not because that’s innately who you are, but that’s how you’ve been taught. If your brain is your personal being, and if your success is determined by your face and your body then you’re easily commodified,” said Shahidi.

While she herself is an inspiration to many young women trying to make it in this game we call life, Shahidi reveals a few of her own, personal Sheroes, giving praises to everyone from her mom, Keri Shahidi to singer, Solange.

“People like, Moj Mahdara, the founder of BeautyCon, is someone I love because when you think about what she does with her platform intentionally, and how she entered the beauty space, she’s not just perpetuating beauty standards, she’s revolutionizing it,” Shahidi explained.

“People like Patrisse Cullors, Angela Davis, and oh, I got to sit next to Bethann Hardison the other day. When I say, total Shero, I was really tripping out! People like Solange with her art. There is something so freeing about looking at what she does because she never fits within the model of what people assume of her.”

The Mattel corporation plans to do it’s part. For every purchase of a Barbie “Shero” doll in the U.S., Mattel promises to donate one dollar to the “Dream Gap Project,” which aids in the fight for young women’s right. The gap refers to the barriers that often deny young girls from ever realizing their full potential due to negative societal and cultural influences.

Shahidi is the BFF for life who anyone would love to have and we can’t thank her enough for being an awesome example for little brown girls worldwide to follow.

Peep the presentation of Shahidi’s new doll at the Empire State Building event below: