Remembering Fannie Lou Hamer: On the 42nd anniversary of her death, see how this powerful women’s rights activist inspires a whole new generation

In an exclusive interview with theGrio, her daughter, Jacqueline Hamer describes another side of her mother, the civil rights icon.

Fannie Lou Hamer is quoted, perhaps more than any other female activist of her generation. And because of her compelling and heartfelt calls to action during the civil rights movement, she has become the subject of numerous books, plays and documentaries. Hamer was a motivator, a humanitarian, a luminary, and yet, among the many things she accomplished, there is one area of her life that has gone scarcely untold – her role as a mother.

To the world, Hamer was this legendary, powerful voice pushing for change at a time when Black women were expected to sit down and be quiet. However, what many people didn’t know is that her innermost desires had nothing to do with politics, but everything to do with family.

Hamer wanted children, but was literally robbed of the chance. Reportedly, after several failed pregnancies, it was discovered that Hamer had a uterine (fibroid) tumor, and during an operation to remove it, a rural doctor gave her a complete hysterectomy.

She felt his actions had amounted to rape because without her consent, he took away something that she would never forget nor regain. His act was a violation.

“I went to the doctor who did that to me, and I asked him, ‘Why?’ Why had he done that to me? He didn’t have to say nothing. If he was going to give that sort of operation, then he should have told me. I would love to have had children,” Hamer recalled then.

What Hamer coined as a “Mississippi Appendectomy,” a forced sterilization of Black women was a common practice in the Deep South. It was yet another means to control Black people by secretly depleting their population.

Being the fighter that she was, Hamer didn’t let this violation stop her from having the family she always wanted. With the support of her husband, Perry, known as Pap, Hamer surrounded herself with children, taking in her first, Dorothy Jean, when she was just eight-months-old.

Sometime later, she adopted her second child, Vergie, her third, Lenora, and her fourth, Jacqueline, each with a story more tragic than the one before. The girls were the children of distant family members who couldn’t afford to care of them. In Vergie’s case, she was left for dead after being burned at six-months-old. Hamer took these girls from a life of even deeper poverty and neglect and raised them as if they were her own. And they were in every shape and form because she provided what they needed most— a home, security and a loving environment.

READ MORE: Raz B bows out of B2K’s tour based on allegations of child sexual abuse against manager

Today, only two of her girls remain, Lenora and her sister, Jacqueline, whom the Hamers affectionately called, “Nook” and “Cookie”, respectively. Hamer spoke of them often when she made her public pleas for better education and living conditions in the Mississippi Delta. 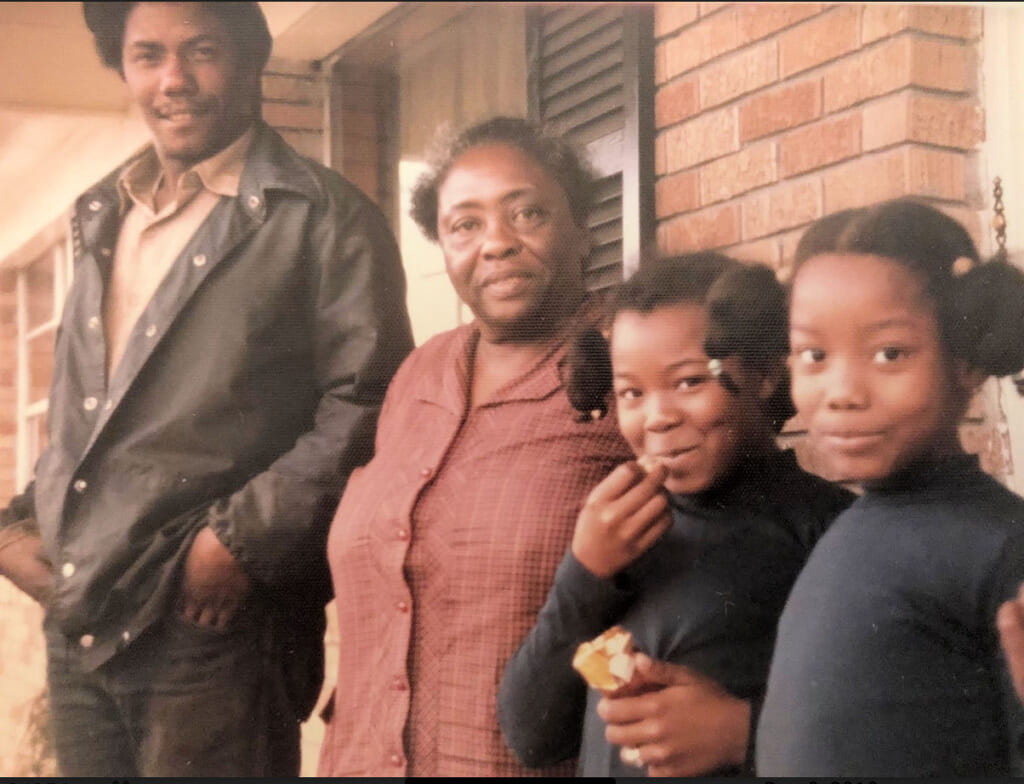 “…I just couldn’t afford to sit down and not do nothing,” Hamer told Neil McMillen, a history professor at the University of Southern Miss., in a 1973 interview. “I know something out there is happening…and I know I can say something…This is not right, and I’m going to get out here and we’re going to do something about it… And if things are better for me and things is better for Nook and Cookie, them two little girls in there, then they’re going to be better for your two kids.”

To the world, Hamer was unapologetic in her delivery, but compassionate in her reasoning. She often met with influential leaders and proponents of civil rights such as Malcolm X, Martin Luther King and Harry Belafonte, but at home, she was simply, “Mama.”

“We went to Fayette, Mississippi once when I was little, and there was a large crowd,” Jacqueline remembers. “Mama was just over five feet tall. But listening her, you would think that she was a giant. The way she talked about the city of Ruleville, what she had gone through, the people that she helped and what others from different states were doing to help the Mississippi Delta residents. Just hearing her speak made my heart proud to just know that she was my mom.”

In the name of justice

By the time Jacqueline was born, Hamer had developed an international following. In 1962, she attempted to register to vote at the courthouse in Indianola, Mississippi and was promptly fired from her job as a timekeeper on a local plantation where she had worked for 18 years.

In 1963, while returning home from a voter education workshop in Charleston, South Carolina, she was arrested with several others, including a 15-year-old girl. The two were viciously beaten while in jail in Winona, Mississippi.

The following year, she helped form the Mississippi Freedom Democratic Party and she later appeared before the Credentials Committee at the National Democratic Convention in Atlantic City, New Jersey. Her testimony was broadcast nationwide catapulting her into Black and white households across the country.

Hamer helped influence the Voting Rights Act of 1965 and traveled extensively on speaking engagements. She appeared on dozens of television and radio shows raising funds and pleading her cause for economic and gender parity in Mississippi and beyond.

Plagued with debilitating health issues, Hamer learned she had breast cancer and died on March 14, 1977. In a twist of irony, her children, Cookie and Nook, wrote letters to  Hamer’s friends and supporters to raise money for her funeral costs. 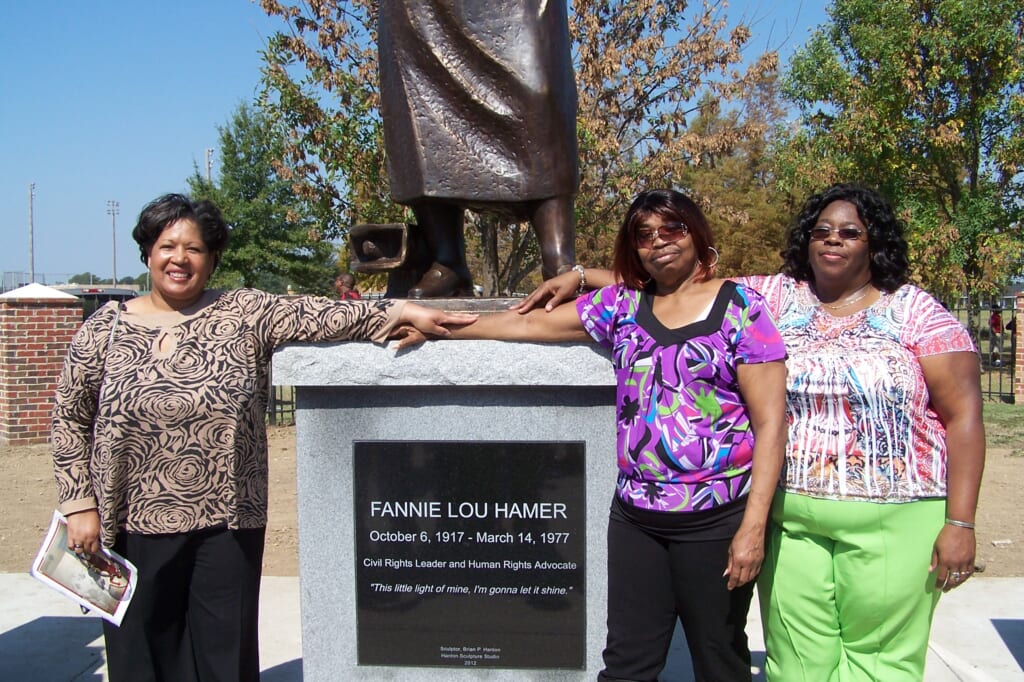 Now 52, and the mother of two adult sons, Trenton and Shadney, Jacqueline, whose biological mother died when she was six-months-old, fondly recalls how her mother’s calling to help those in the community can still be a huge influence today.

“People were sending food in by the truckloads,” said Jacqueline. “We had 18-wheelers that were parked in our yard. We had 18-wheelers bringing in clothing. I can remember my dad saying, ‘Baby, you’re going to give everything away. You’re going to give away your last.’’ But it didn’t matter to her. She was like, ‘It’s not mine. God gave it to me.’ All she wanted was to bless others because we were being blessed.”

“I can remember her just sitting around peeling apples or pears. We had a four-car garage at the time, but there were never any cars parked there. There was always clothes, food and cases and cases of preserves that she would can. We had deep freezers with soup and other foods that she had put away for the winter. My dad raised hogs and my uncles in Kilmichael had cows, so we always had meat and, she just gave to people. I think that’s why I have a caring spirit because being around her, you couldn’t help but want to give and give freely. It’s like she said, ‘God gave it us. He blesses us so we can bless others. And he gets the glory from it.’”

Jacqueline has continued her mother’s sense of justice and humanity. She has pursued careers in nursing and emergency response. As a teenager, she started working as a relief dispatcher and once studied nursing at Mississippi Delta Community College. Now, she’s the water clerk for Ruleville, Mississippi, a position her older sister, Lenora, held for nearly 30 years prior to her retirement.

In August 2018, Jacqueline’s life took her on a different journey, a path already traveled by her mother.

“I’ve been diagnosed with stage two Breast Cancer and what I’m going through is nothing compared to what she went through because then there was a Whites Only and Blacks Only in the doctor’s office,” revealed Jacqueline. 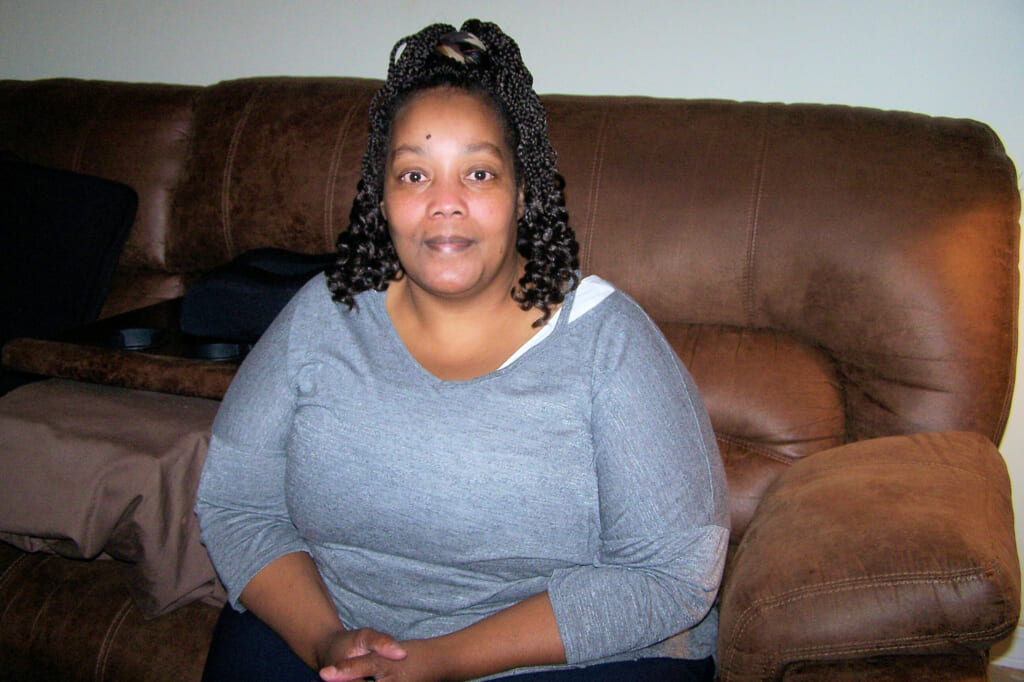 “There were some people who didn’t make a difference in her race and they did what they could. She was getting the treatments the Caucasians were getting. But it was to the point that it had spread all over her body, but she still tried to go on. She still tried to make her trips and give her speeches. Who ever needed her, she was there.”

Jacqueline says her mother was transported from state-to-state for treatment, but ultimately, they all failed.

“I can remember the nights when she would call me, and say, ‘Baby, come here and get in the bed with Mama’. It was bad.”

Pap to the rescue

Throughout her life, Hamer applauded her husband Pap for his unwavering support which allowed her to accomplish so much in such a short time. When she traveled, he took care of the children, a trait that continued long after her death.

READ MORE: Diana Ross handled a crazed fan like a boss during a surprise NYC concert

“He was the love of her life,” Jacqueline said. “She was on the road with all kinds of people and he wasn’t jealous. He was by her side 100 percent. Somebody asked him one day, ‘Pap, since Fannie Lou is gone, what are you going to do with those girls?’ And he said, ‘What do you mean? Those are my babies. I’m going to keep them.’ And that’s what he did. He couldn’t cook. He learned to cook. He did his best. We couldn’t go to him and ask him questions like you would a mom, but there were women all around us. We never wanted for anything. We never asked for anything and I’m just grateful that Pap Hamer was her mate.”

Since her sister Vergie’s death in October 2017 and her sister, Lenora’s recent health decline, Jacqueline has carried forth as the voice of Fannie Lou Hamer. In November 2018, she sent a video message to an audience at Stockton University in Atlantic City, where a hall was renamed in her mother’s honor.

“What I want for our children, and our children’s children, is they stand on God’s word and carry the torch that we shall overcome,” said Jacqueline who vows to continue her mother’s legacy.

“We’re trying and we’ve come a long way. But we still have a ways to go. I want the kids to know that Fannie Lou Townsend Hamer did not go through all of that for nothing. Don’t allow someone else to carry the torch for you when we have our children to do it. So, step up and take a stand for what’s right.”

Monica Land is an award-winning investigative journalist and reporter from Chicago, Ill. She has written for several national and local media outlets and has produced historical segments for Entertainment Tonight and A&E’s Biography. Land is also Fannie Lou Hamer’s great-niece. She is currently producing, a new documentary, Fannie Lou Hamer’s America, a multimodal project that includes a new and original documentary slated for release later this year.