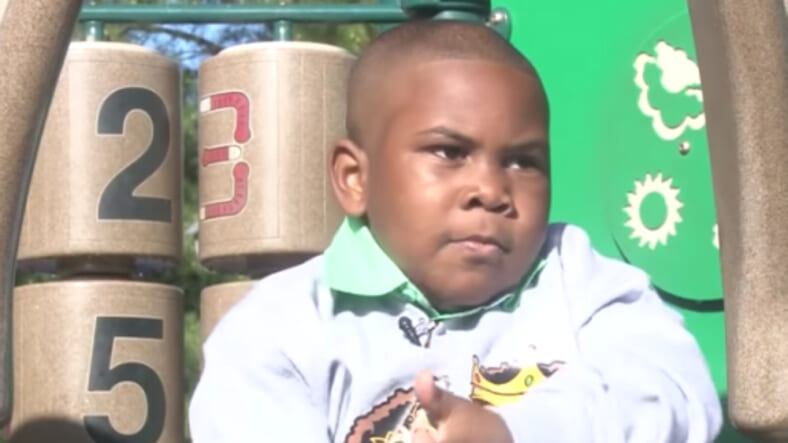 A photo of Andriel Miles’ son Drew went viral after she shared a Facebook post complaining about his hilarious school picture. (13WMAZ)

Andriel Miles’ 5-year-old son took saying cheese to a whole new level for his school photo and now he’s getting the last laugh.

The Georgia mom got a big surprise when she reviewed her son Drew’s school photo package. Instead of a traditional smile, she was greeted with an image that looked like her son was stuck in the middle of a perpetual scream.

“I’m so mad right now! I checked my sons book bag and find these!!!!” she wrote on Facebook.

Miles posted the photo on social media and while she was angry at first, it gave many a collective belly-laugh and instantly became a meme that seemed to brighten everybody’s day, WLKY reports.

Miles says the supportive response she received allowed her to accept her beautiful baby boy’s comical pose and personality.

“Everyone is just embracing the photo and loving the photo,” Miles told WMAZ. “That one photo showed all of his personality. How sweet he is, how loving he is.”

She’s clearly come a long way from the sentiments she first shared on Facebook.

“Please allow me to explain my first reaction and how I feel now. Firstly, we have decided to purchase the photos. I was initially upset because I was expecting a traditional school picture. I have spoken with representatives at Lifetouch School Photography who simply told me the issue would be escalated and someone would follow up. I saw an article that said free spirited photos are their policy. If I had known, I’d have no reason to feel upset about not getting a traditional picture. Regardless, knowing that his silly picture brought joy all over the world, how can I continue to be flustered?

Andrew has always been a silly kid with a HUGE personality! He has taken traditional professional pictures in a school setting in the past that were wonderful. That is the reason this really threw this mom for a loop!

I love my son. All the positive comments really warmed my heart. They opened my eyes to see that everything doesn’t need to be cookie cutter. Being yourself is even more amazing! Drew sends his love and says thanks again for the love! Drew
Age 3.”

Miles said she understands now why LifeTouch allowed her son to take the unorthodox pic. They explained that free-spirited photos are part of their policy.