Face the Facts: The Mueller Report will not get Donald Trump impeached, now let’s focus on the real ish 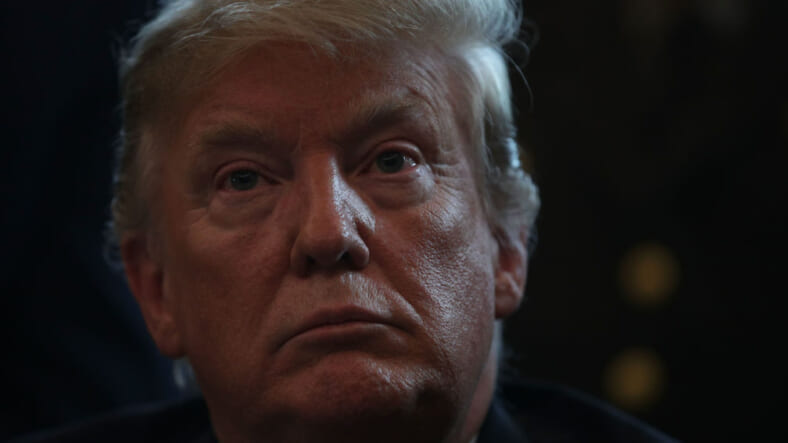 I swear, Donald Trump has more Teflon on him than John Gotti.

For nearly two years, we’ve all held on to hopes that the Anointed One, Special Counsel for the United States Department of Justice Robert Swan Mueller III’s investigation into whether there was Russian collusion during the 2016 presidential election would bear the fruit that would lead to an impeachment at the least – and perhaps jail time – for the most moronic sitting president there ever was.

The investigation has already claimed several noggins, including that of former Trump campaign chairman Paul Manafort, who’s about to sit down in Club Fed for a few years. When the news dropped late last week that his report was finally complete, the results were immediately more highly awaited than the Game of Thrones finale. And then…nothing. Attorney General William Barr released a letter to Congress that absolves Orangina of any collusion, which – to reference Game of Thrones twice in one paragraph – was like the Red Viper thinking he defeated the Mountain, only to get his skull crushed in.

This was just the boost Trump needed to energize anyone in his base who thought he might have had shady dealings with a foreign government and will doubtlessly help him going into the 2020 election. Like a confused ex after an apology, he even praised Mueller when he used to publicly shit on him.

On Monday, everyone seems interested in reminding us that Barr’s letter is the Cliff’s Notes version of the actual report and that it could contain some shit that would hold Trump’s feet to the fire. Even Auntie Maxine Waters reminded that she and her colleagues will continue down the road of holding Trump accountable for…things and stuff.

MORE: Maxine Waters says she will not lay off Trump despite Mueller report

.@RepMaxineWaters: This is not the end of anything. It’s the end of the report and the investigation by #Mueller. But those of us who chair these committees have the responsibility to continue with our oversight… So it’s not the end of everything. #AMJoy #MuellerReport pic.twitter.com/k17VxlyM8H

The Mueller report has been released to Attorney General Barr. We’ve been waiting for two years! Barr has the discretion about what he releases to the public. Let’s tweet, tweet, tweet and demand that the entire report be released! We deserve nothing less!

Love the dedication, but I don’t think any of this shit matters anymore. Remember how the first two years of Trump’s presidency resulted in a think piece from damn near every news publication big and small claiming that Trump was over? That his presidency would end at any moment because he simply went “too far” with atrocity A, B, or C? This Mueller “exoneration” proves that he’s as close to being untouchable as a human living under our laws can be.

Trump has the aegis of the goddamned United States presidency behind him, and there are far too many people in Congress and elsewhere with a vested interest in protecting him.

My suggestion is that we move away from focusing on the Mueller probe or any notions of impeaching Trump at this juncture – it’s an election season. Trump already has a natural advantage as an incumbent, and if we have anything resembling a national emergency in the next year and a half, folks will be even more motivated to keep the rank idiot we have in office to “fix” it.

Meanwhile, we have enough Democratic candidates to field a soccer team – more so than usual  – and there’s nothing resembling a union behind any one of them. Bernie Sanders is trying to pull a Hillary Clinton by going for two beatings in a row, and two of the candidates would have had a better chance running in 2016 but now have a stink on them that they can’t shake (I’m looking at you, “Chief” Elizabeth Warren and Mr. Rosario Dawson).

Read five different analyses on what we need to do to win 2020 and you’ll get five different answers. Mine is that the Dems need to be less gracious and focused on bipartisanship as a party – as Speaker Nancy Pelosi infamously suggested – and work toward sculpting that aggressiveness that the GOP has mastered. The cult of personality is a powerful drug, which is part of the reason we got a racist, homophobic xenophobe in the highest office in the land.

The public is not well informed enough (read: too stupid) to vote to the issues, so it would seem that charisma, a cursory understanding of the issues (fake it ‘til you make it) and a general lack of problematic bullshit is the trifecta we need to rid the Oval Office chairs of spray tan stains. One thing I’m certain of: We need to let go of notions of impeachment, and of Mueller’s probe and whatever else is in there for now. It was a noble effort (maybe), but it’s a wrap now. Let’s just focus on getting this plum fool out of office in 2020.