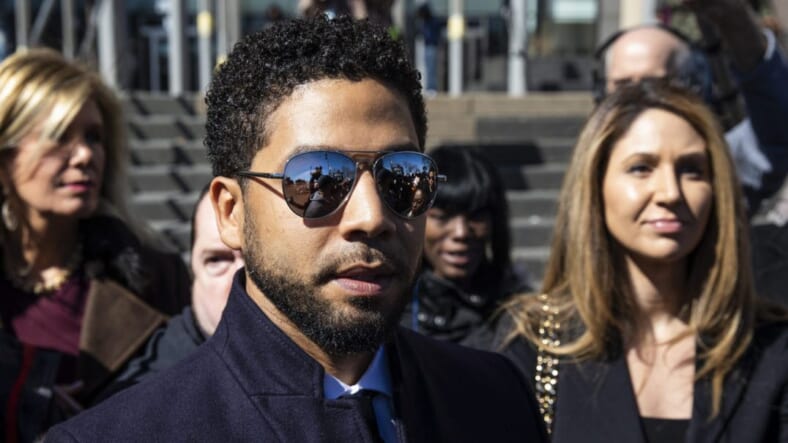 Actor Jussie Smollett leaves the Leighton Criminal Courthouse in Chicago on Tuesday March 26, 2019, after prosecutors dropped all charges against him. Smollett was indicted on 16 felony counts related to making a false report that he was attacked by two men who shouted racial and homophobic slurs. (Ashlee Rezin/Sun-Times/Chicago Sun-Times via AP)

Chicago prosecutors may have dropped all charges against Empire star Jussie Smollett on Tuesday, but the office quickly made clear that “we didn’t exonerate him.”

Smollett was facing half a century in prison after being indicted earlier this month on 16 felony counts of filing a false police report.

First Assistant State’s Attorney Joe Magats said in an interview with New York Times on Tuesday that the decision to drop the charges came after the singer/actor agreed to forfeit his $10,000 bond to the city of Chicago, TheWrap reports. It is also being reported that his previous community service was taken into consideration. Even so, Magats wants to be clear that his office’s decision to expunge the charges do not equate Smollett’s innocence.

New York Times reporter Julie Bosman noted on Twitter that while Magats saw no problems with the police investigation or the evidence against Smollett, he affirmed that his office works “to prioritize violent crime and the drivers of violent crime,” therefore,  “I don’t see Jussie Smollett as a threat to public safety” he said.

Magats, the asst state’s atty, said he saw no problems with the police investigation or the evidence against Smollett. The charges against Smollett were dropped in return for his agreement to do community service, he said, and for forfeiting his bond to the city of Chicago.

Smollett’s lawyers claimed earlier on Tuesday that the dropped and expunged charges were not part of any deal and that the actor is free to move on from this situation, which goes against what Magats is saying now.

Meanwhile, this stunning turn of events in the case angered Mayor Rahm Emanuel and Chicago Police Superintendent Eddie Johnson, both expressed their anger and clear disappointment with the state’s attorney’s office’s decision.

“This is a whitewash of justice,” Emanuel said, noting that a grand jury indicted Smollett based on a “sliver” of the evidence police had gathered in the case.

Johnson believes Smollett’s legal team “chose to hide behind secrecy and broker a deal to circumvent the judicial system.”

“Do I think justice was served?” Johnson said. “No.”

Jussie Smollett had been accused of staging a hate crime attack against himself in downtown Chicago and then lying to police about it in late January. He has consistently denied the accusations.

“After reviewing all of the facts and circumstances of the case, including Mr. Smollett’s volunteer service in the community and agreement to forfeit his bond to the city of Chicago, we believe this outcome is a just disposition and appropriate resolution to this case,” the Cook County State’s Attorney’s Office said in a statement.

Now that the case is sealed, we may never know what really happened to get Smollett completely exonerated from all 16 federal counts.