Disease has cost Africa 630 million years of ‘healthy life’, according to WHO study

Public health should be the highest priority for Africa, says a report by the World Health Organization, or it will cost the continent even more than the trillions of dollars it already has 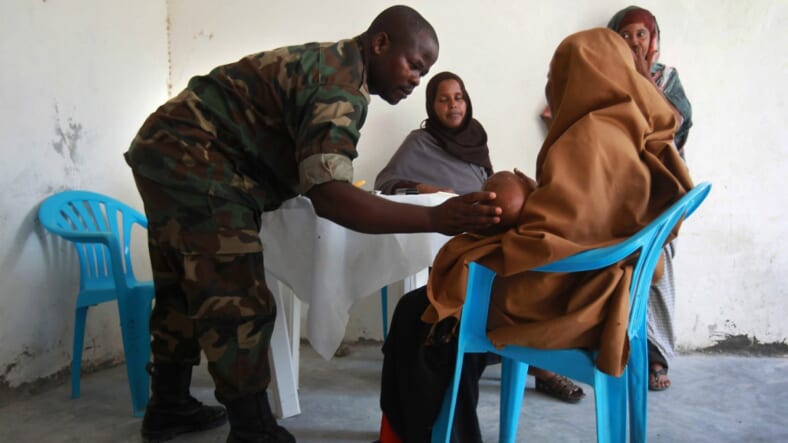 A Ugandan doctor checks a Somali child at an outpatient hospital run by the African Union Mission in Somalia (AMISOM) in Mogadishu, Somalia. (Photo by John Moore/Getty Images)

Diseases, disability and early death, resulting from illness, has cost the economy of the African continent’s 54 nations $2.4 trillion in annual workforce productivity losses in 2015 and an estimated 630 million years of “healthy life.”

These estimates come from from a World Health Organization (WHO) report which stated that the Africa’s economy will continue to decline rapidly if the government doesn’t seriously consider allocating some of its spending revenue on healthcare.

READ MORE: A Florida mayor of Jamaican descent is considering running for President

WHO stated that the continent’s economy will continue to decline rapidly if the government doesn’t seriously consider allocating some of its spending revenue on healthcare.

According to the report, 37 percent of the diseases recorded are attributed to non-communicable diseases, which have overtaken infectious diseases as the largest drain on productivity. Other factors for loss of healthy years can be traced back to communicable and parasitic diseases, as well as maternal, neonatal and nutrition-related conditions. Not to mention, injuries sustain from hazardous conditions.

Dr. Matshidiso Moeti, who is also the WHO Regional Director for Africa, told The (UK) Telegraph that the loss is “astounding,” and causes a need for concern. “I think the message is very simple: it’s wasteful not to invest in health. Health is a good investment, and where countries are grappling with different strategies to grow GDP, it would be really unwise to ignore this fact,” Moeti noted.

The report also calculated that improvement on health and healthcare could drastically boost African’s continental economy by at least $796 billion by 2030.

“This report shows that we’re under-investing in terms of health as a continent,” Dr Jean Paul Adam, Minister of Health for the Seychelles, told The Telegraph. “While we can talk to the private sector about plugging some of the gaps, basic primary care is the responsibility of governments and we must invest from the outset.”

While the means to invest in sustaining the lives of millions may seem like an economical and political pipe dream, health economist of WHO Africa, Grace Kabaniha, told Africanews.com, noting that it is a “small price to pay,” for a positive, continental turnover.

“When you compare the investment costs to what we lose annually, it is such a small price to pay. Achievement of the critical health SDG targets, including universal health coverage, would contribute to poverty eradication efforts on a large scale.”