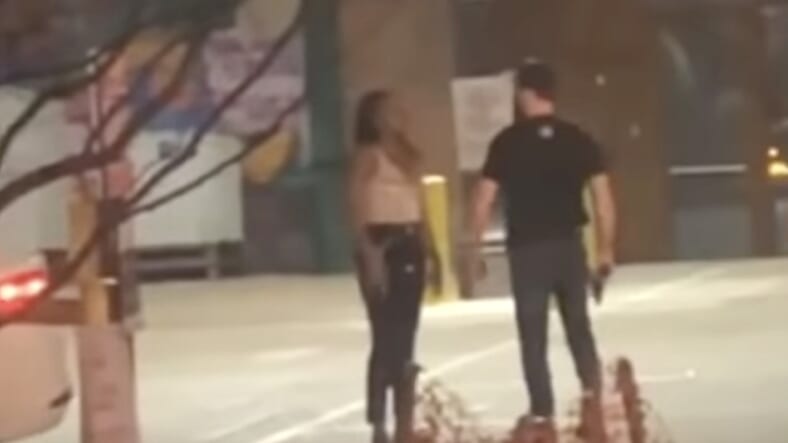 After allegedly attacking a Black woman in a Dallas parking lot, the charges against a white man who is believed to have shouted racial epithets have been upgraded to add a felony assault, police said Thursday, the Dallas Morning News reports.

Austin Shuffield, 30 is now facing charges of aggravated assault with a deadly weapon, a second-degree felony, and unlawfully carrying a weapon.

The newest charge follows a week of protests after the Dallas bartender was caught on camera brutally punching a woman whose car was blocking the exit to a parking lot. Shuffield got out of his truck, asked her to move and a conflict ensued between the two of them. When she pulled out her phone to call police, he slapped the phone out of her hand, after which she threw a punch at him.

He responded by repeatedly striking the woman, identified as L’Daijohnique Lee, 24, while holding a gun in his hand. A video captured the incident and was sent to local station KTVT-TV.

Lee is still recovering in a local hospital from cranial injuries, says her attorney S. Lee Merritt. He said in a text to the Daily Mail, that his office is interested in pursuing hate crime charges because he is believed to have uttered racial slurs at the woman.

‘Our office is speaking with the Dallas Police Department and the Dallas County District Attorney’s office to ensure all appropriate charges are pursued, including felony assault, firearm and hate crime-related charges,’ Merritt said.

Shuffield worked as a bartender in the Deep Ellum neighborhood of East Dallas, Tex., and was arrested March 21 on charges of aggravated assault, interference with a 911 call and public intoxication. He was and booked into the Dallas County jail and was released on $2000 bond.

His former boss at the High and Tight Barbershop, which is a combination bar and barbershop, Braxton Martin said this was bad behavior from an otherwise good employee. He was fired by the establishment, according to a Facebook post.

There is now a warrant out for Shuffield’s arrest on the unlawful-carry charge, Police Chief U. Renee Hall said at a news conference.

A Dallas County grand jury will decide whether to indict Shuffield on the aggravated assault charge.

Rev. Michael Waters of Agape/Joy Tabernacle African Methodist Episcopal Churches said Thursday that while he was relieved Shuffield was hit with additional charges, “it would’ve taken this long to get to justice,” if a Black man had assaulted a white woman in Deep Ellum.

Shuffield also hurled racist slurs at her and Waters and faith leaders believes additional hate charges should be added as well.